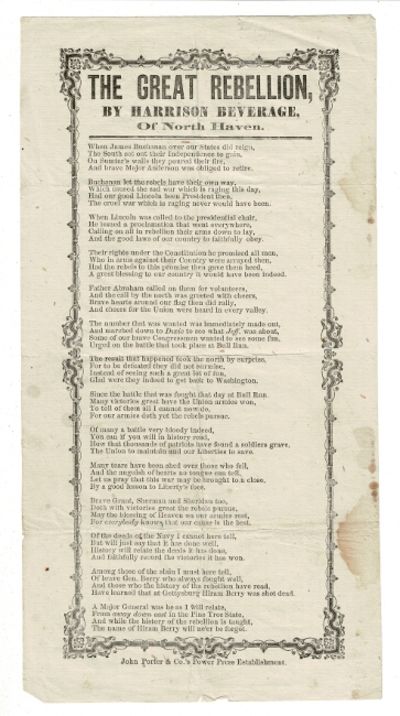 by Beverage, Harrison, of North Haven
[Rockland, Maine]: John Porter & Co.'s Power Press Establishment, n.d., 1865. Broadside, (approx. 11"x 5⅞"), previous folds, a couple of light, marginal stains; very good. Caption title and 14 quatrains within an ornamental border. The last two stanzas are a tribute to Gen. Hiram Berry: Among those of the slain I must here tell, Of brave Gen. Berry who always fought well, And those who the history of the rebellion have read, Have learned that at Gettysburg Hiram Berry was shot dead. A Major General was he as I will relate, From away down east in the Pine Tree State, And while the history of the rebellion is taught, The name Hiram Berry will n'er be forgot. Not found in OCLC, which does record a handful of Porter imprints between 1850 and 1870, among them the Rockland Gazette. This poem was probably written for the ceremonies inaugurating a statue of Berry in Rockland, October 31, 1865. It appears to be the only publication of Beverage. He is listed in the 1860 Federal Census as a "Gentleman" and in 1870 as a "farm laborer," in both cases a resident of the island community of North Haven, Knox Co., Maine. (Inventory #: 57452)
$316.25 add to cart or Buy Direct from
Rulon-Miller Books
Share this item