Lectures on history, delivered in the Normal School of Paris. Translated from the French 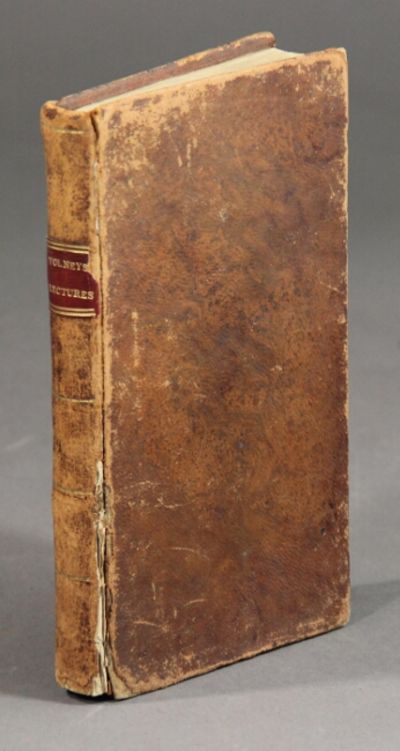 by Volney, Constantin F.
Philadelphia: printed for John Conrad & Co. No. 30, Chestnut-street, M. & J. Conrad & Co., no. 140, Market-street, Baltimore; and Rapine, Conrad & Co. Washington City. J. Bioren, printer, 1801. Ostensibly, the first American edition (see below); 16mo, pp. xvi, 186, [2] ads; contemporary full sheep, red morocco label on spine; upper joint cracked, extremities rubbed; a good, sound copy. Volney (1757-1820), the French savant, undertook a journey to the United States in 1795 where he was accused in 1797 of being a French spy "sent to prepare for the reoccupation of Louisiana by France. He was obliged to return to France in 1798. The results of his travels took form in his Tableau du Climat et du Sol des Etats-Unis, 1803" (EB-11). Page 186 contains a note from the translator. Both Jefferson and Barlow had translated Volney's Les Ruines, ou méditations sur les révolutions des empires, published in 1802 in Paris, but there's no evidence they had any part in this translation. The translator remains unknown. Evans 29822 records a 1795 edition under a slightly different title (no copies located in Evans), and of which no copy in OCLC either; this may be a ghost. American Imprints 1592. (Inventory #: 57475)
$230.00 add to cart or Buy Direct from
Rulon-Miller Books
Share this item