First-hand Account of the Aftermath of the Ohio River Flood of 1937, Which Left a Million People Homeless 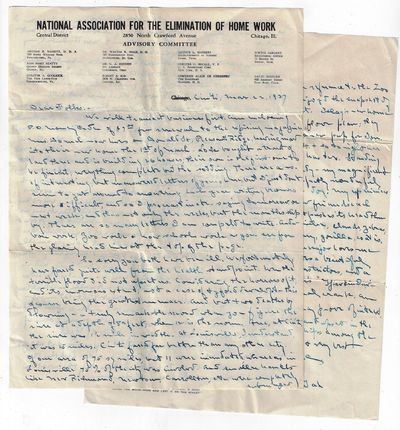 Very good. Three-page manuscript letter, approximately 800 words, from Dr. G.A. Hinnen of Cincinnati, Ohio, to his parents. Dated March 22, 1937 and written on letterhead of the National Association for the Elimination of Home Work, of which the Hinnen was on the Advisory Committee. Writing more than a month after the devastating flood that stretched from Pittsburgh to Cairo, Illinois and left 385 people dead, Hinnen expresses gratitude that Cincinnati (where 100,000 lost their homes) suffered less than many other cities. "Considering the horrors of it, and its enormous extent, not a case of typhoid...and but two deaths by drowning -- a truly remarkable record when you figure the river at a depth of 80 feet, when 12 is the norm. Here at Cinti the river was 1 1/2 miles in width. At Louisville, I understand, it was 15 miles." After describing the utter devastation of most of the small towns around Louisville, he returns to conditions in Cincinnati, writing that that the city's "greatest hardship was lack of water. When the pumping plant finally submerged at 75 feet, we were in a quandry. For two weeks not a trickle out of any faucet. So we hauled water. You have heard and read about bread lines, but little did we expect to participate in a water line. Norwood, St. Bernard, Wyoming [Ohio], Columbus, Chicago, Indianapolis, Dayton, Hamilton, all came to our rescue most valiantly. The Penn RR brought in 40,000 gal. from Chicago. Water was paddled in the streets from concrete mixers, tanks, and whatnot. They would ring bells and people dashed out madly with any available receptacle...All business was suspended. Drug stores and food shops were the only stores allowed to be open. Where electricity was available, you were allowed but a single small light to a house, and [on] the radio, fire, police, and emergency orders were constantly being transmitted... No autos allowed below Court St. While not actually martial law, it practically amounts to it. No street lights at night. I never saw such desolation." A well-written and compelling account of life in Cincinnati in the aftermath of disaster. (Inventory #: 21323)
$100.00 add to cart or Buy Direct from Walkabout Books
Share this item