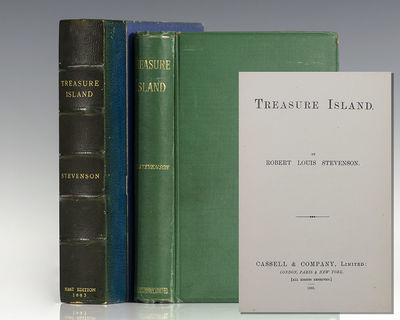 by Stevenson, Robert Louis
London: Cassell & Company, 1883. First edition, first issue with all the following points: with 8 page publisher's list at end, the first state October ads numbered 5R-1083; "dead man's chest" not capitalized on pp. 2 and 7; broken type in "vain" and miscreant" last two lines of p. 40; "a" missing in line 6, p. 63; p. 83 with the page number missing the 8; number 2 overstamped in a different font in the numbering of p. 127; period not present on line 20 of page 178; "worse" instead of "worst" on line 3 of page 197. Octavo, original green cloth. In near fine condition with a touch of rubbing, name to the half-title page. Housed in a custom half morocco clamshell and chemise box. A very sharp example. Inspired by a detailed map of an island that Stevenson and his stepson drew one rainy day, with hidden treasure and cryptic instructions reverently included... Treasure Island is best enjoyed as its author intended, simply as a good tale well told" (Silvey, 631). The serial publication in Young Folks (running through January 1882) was not especially well-received, but on its appearance in book form the following year in an edition of only 2000 copies, the story was hailed as the best tale of adventure in print. "The force of invention and vividness of narrative appealed to every reader" (DNB). (Inventory #: 118790)
$12,500.00 add to cart or Buy Direct from
Raptis Rare Books
Share this item