WRITING HOME IN THE AFTERMATH OF THE BATTLE OF SHILOH, from their "Camp before Corinth, Miss., May 19th, 1862." 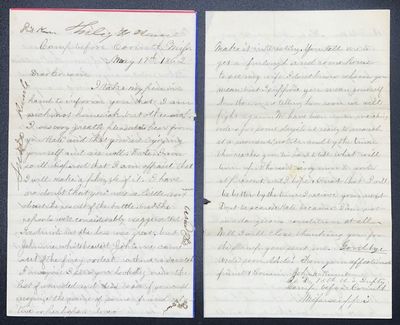 by Kumler, John M. (1840-1863)
Autograph letter, signed, from John M. Kumler, Co. D, 15th U.S. Infantry, to his cousin Kate. Two sheets of lined paper, folded to 7.5 x 4.5 in., 7 pp., approx. 900 words. First page of each sheet bordered with a red and a blue line on two sides, old fold lines, some nicks along folds affecting a word or two, else legible.
Kumler writes to his cousin, in response to a letter from her asking about the battle of April 6-7: "I have no doubt that you are a little anxious about the results of the battle but the reports were considerably exaggerated. I admit but the loss was great, but Johnnie, whiteheaded Johnnie came out of the firey [sic] ordeal without a scratch. I imagine I saw you looking over the list of wounded and dead to see if you could recognize the name of some friend relative or perhaps a lover...." He describes "the fatal field of Shiloh, April 6-7... long to be remembered by the surviving patriot soldiers.... You ask whether I killed any secesh whether I saw any fall I aimed at. Now these are questions I cannot answer. 1st (you may think it very strange) I didn't see anyone to shoot at because the undergrowth was so thick we couldn't see much more than fifty yards. We fought all day behind trees if they were handy and where they were not we lay down to fire & load which saved many an aspiring youth. As a general thing they shot too high but I tell you the balls discoursed some soul stirring music over our heads and had it not have been for a generous old tree that had fallen I too would no doubt have been obliged to bite dust. But we drove the rascals from every position they took capturing a battery. I don't know then whether I killed any but I, like the rest, shot directly where I saw the smoke of a gun. And I shot at the Colors once or twice. It was a serious time I assure you...." Kumler goes on to mention that he saw Dr. Landis who had seen Simon [Kumler's brother], but that he could not find him. He mentions a few other names from home and speaks wistfully of wanting to see Kate again. The battle at Shiloh [also known as Pittsburg Landing] in southwestern Tennessee raged for two days in early April 1862. Confederate Generals Johnston and Beauregard managed to surprise the Union forces on April 6 before Gen. Grant's Army of the Tennessee was fully in position. Beauregard felt confident enough in his successes during the day to send a victory telegram to Richmond: "After a severe battle of ten hours, thanks be to the Almighty, [we] gained a complete victory, driving the enemy from every position." He was unaware that Gen. Buell's Army of the Ohio, which included Kumler's 15th U.S. Infantry, had arrived as Grant's reinforcements late in the afternoon. The fierce battle of April 7, described in Kumler's letter, resulted in nearly 20,000 men killed and wounded (about evenly divided between Union and Confederate soldiers). Capt. Peter Swaine who commanded the 8 companies of the First Battalion of the 15th U.S. Infantry, part Brig. Gen. Rousseau's 4th brigade, said proudly that his "cool, sturdy and obedient soldiers" - regulars all - scythed down the Rebels with their accurate fire. [see the article "Account of the Battle of Shiloh" by James Ronan in the May 1996 issue of "America's Civil War" Magazine]. Gen. Sherman, in his "Memoirs" likewise praised Rousseau's 4th: "Rousseau's brigade moved in splendid order, steadily to the front, sweeping everything before it...." James McPherson, in "Battle Cry of Freedom," [NY: 1988, pp.413-4] notes that the carnage at Shiloh "disabused Yankees of their notion of a quick Confederate collapse in the West.... Before Shiloh, Grant had believed that one more Union victory would end the rebellion; now he 'gave up all idea of saving the Union except by complete conquest.' Shiloh launched the country onto the floodtide of total war."