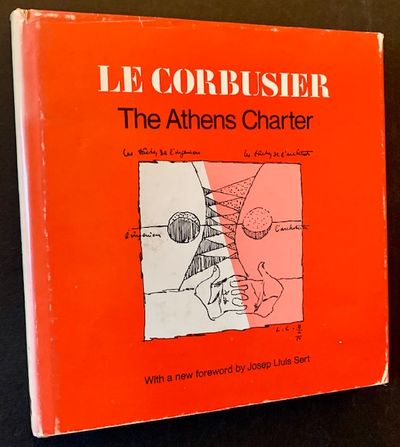 by Le Corbusier
New York: Grossman Publishers, 1973. Cloth. Near Fine/Very Good. The 1973 first published English translation of "The Athens Charter", including "a new foreword by architect Josep Lluis Sert, former Dean of the Harvard Graduate School of Design and officer of the CIAM, who contributed to the creation of this magnificent plea for urban rights." Clean, tight and Near Fine in a bright, price-intact, VG dustjacket, with fading along the spine, several very small closed tears to the rear panel and very light rubbing at the front panel's edges. "The great modernist manifesto, a milestone in the history of urban planning, the result of the fourth meeting of the CIAM (International Congress for Modern Architecture), held in 1933 aboard the steamship Patris II, which cruised from Athens to Marseilles and back" (from the front flap). (Inventory #: 18465)
$100.00 add to cart or Buy Direct from Appledore Books
Share this item
Appledore Books
Offered by

Baptists in New Jersey: A Study in Transition

Valley Forge, PA : The Judson Press , 1964
(click for more details about Baptists in New Jersey: A Study in Transition)

The Gremlins: From the Walt Disney Production

New York : Random House , 1943
(click for more details about The Gremlins: From the Walt Disney Production)
View all from this seller>