The New Testament of Our Lord Savior Jesus Christ. 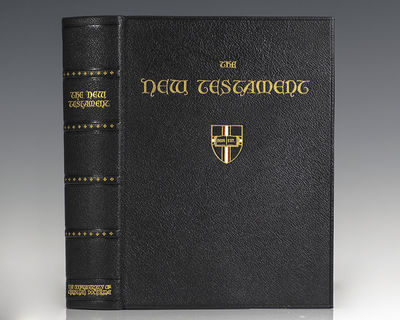 Paterson, New Jersey: St. Anthony Guild Press, 1941. First and limited deluxe Confraternity edition of the New Testament. Quarto, bound in full black morocco with gilt titles and tooling to the spine and front panel, inner dentelles and gilt morocco doublures, watered silk endleaves. One of one thousand numbered copies, this is number 592. In fine condition without wear. The Bible has had an unprecedented influence on literature and history, especially in the Western World, where the Gutenberg Bible was the first book printed using movable type. According to the March 2007 edition of Time, the Bible "has done more to shape literature, history, entertainment, and culture than any book ever written. Its influence on world history is unparalleled, and shows no signs of abating." With estimated total sales of over 5 billion copies, it is widely considered to be the most influential and best-selling book of all time. Attitudes towards the Bible also differ among Christian groups. Roman Catholics, high church Anglicans, Methodists and Eastern Orthodox Christians stress the harmony and importance of both the Bible and sacred tradition, while many Protestant churches, including Evangelical Anglicans, focus on the idea of sola scriptura, or scripture alone. This concept arose during the Reformation, and many denominations today support the use of the Bible as the only infallible source of Christian teaching. Others though, advance the concept of prima scriptura in contrast. (Inventory #: 119406)
$750.00 add to cart or Buy Direct from
Raptis Rare Books
Share this item