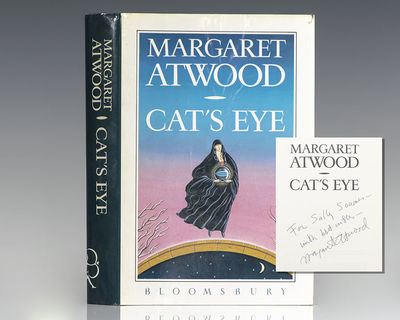 by Atwood, Margaret
London: Bloomsbury, 1989. First edition of this "brilliant, three-dimensional mosaic... the story of Elaine's childhood is so real and heartbreaking you want to stand up in your seat and cheer" (Boston Sunday Globe). Octavo, original cloth. Association copy, inscribed by the author on the title page, "For Sally Soames- with best wishes- Margaret Atwood." The recipient, British photojournalist Sally Soames, worked for The Sunday Times from 1968 until 2000 and was highly regarded for her exclusively black and white portraits of many of the most prominent figures of the 20th century including Menachem Begin, Margaret Atwood, Margaret Thatcher, Sean Connery, Rudolf Nureyev, Alec Guinness and Andy Warhol. Soames, who was known to be a warm and personal journalist, performed extensive research on her subjects and developed intimate rapports with them during her process, resulting in striking and revealing portraits. In addition to the several world leaders Soames came to know and photograph, she captured the unique personalities of some of the world's most gifted authors, poets, and playwrights. She published two books of photographs during her lifetime: Manpower (1987) with text by Robin Morgan and an introduction by Harold Evans and Writers (1995) with a preface by Norman Mailer. Fine in a near fine dust jacket with a touch of shelfwear. Cat's Eye is the story of Elaine Risley, a controversial painter who returns to Toronto, the city of her youth, for a retrospective of her art. Engulfed by vivid images of the past, she reminisces about a trio of girls who initiated her into the the fierce politics of childhood and its secret world of friendship, longing, and betrayal. Elaine must come to terms with her own identity as a daughter, a lover, an artist, and a woman--but above all she must seek release form her haunting memories. (Inventory #: 118434)
$300.00 add to cart or Buy Direct from
Raptis Rare Books
Share this item