Klondike Gold" and 24 Other Pieces of Sheet Music Published by William Randolph Hearst in the San Francisco Examiner, 1896-1905 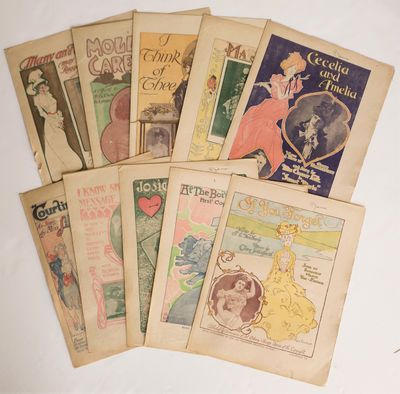 Softcover
Softcover. Very good. Collection of 25 pieces of sheet music issued as Sunday supplements to the San Francisco Examiner, each 4 pp, 14 x 10.5 inches, printed on thick newsprint. All with the name "R. James" in ink on the cover, a few with short tears at margins or light soiling; very good overall. Between 1895 and 1911, William Randolph Hearst published more than 650 pieces of sheet music in his newspapers. Most pieces were reprints of recent popular songs, but each was given new cover illustration printed in color, often including a photograph of the performer who popularized the piece. Although primarily intended to help sell newspapers, the inclusion of sheet music and the selection of songs included also reflected Hearst's personal interest in vaudeville, burlesque, musical theater, and other popular forms of entertainment. Other papers had begun publishing sheet music in the late nineteenth century, but Hearst was only newspaper publisher to commission new songs. Among these commissions was "Klondike Gold," published in 1898 and included in this collection. The song warns of the perils (freezing, starvation) of following the stampede of hopeful men and women seeking their fortunes in the Yukon. Also included here is "Battle Hymn Written by the Mikado of Japan," another original piece, which purports to have been "sung by the Japanese armies on the battle fields." Some of the other (reprinted) pieces also claim "ethnic" or international themes -- such as "Sonoma, A Mexican Serenade" and "O, Love," described as a "Famous Filipino Serenade brought from Manila by the Leader of the First California Volunteer Band." There are also love songs, comic songs, and pieces from musical theater. A rather unexceptional song called "At the Bottom of the Hill," is said to be the "first copyrighted song of the new century." In all, an interesting collection reflecting popular musical taste at the turn of the twentieth century. (Inventory #: 21298)
$350.00 add to cart or Buy Direct from Walkabout Books
Share this item

Sketches in Crude-Oil, Some Accidents and Incidents of the Petroleum Development in All Parts of the Globe

Harrisburg, PA : Published by the Author , 1896
(click for more details about Sketches in Crude-Oil, Some Accidents and Incidents of the Petroleum Development in All Parts of the Globe)


(click for more details about Collection of 22 Factory Photographs of Cotton Gins Manufactured by the Carver Cotton Gin Company of East Bridgeport, Massachusetts)
View all from this seller>