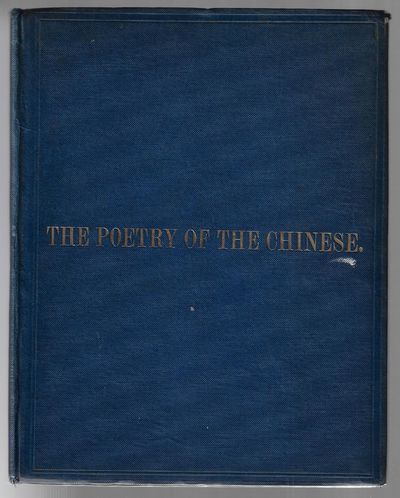 by Davis, John Francis
London: Asher & Co, 1870. Hardcover. Very good. New and Augmented Edition. 4to, pp vii, 88. Bound in publisher's blue cloth with title stamped in gilt on front board. Cloth slightly toned, one small white mark on front board, corners rubbed. Foxing to first few leaves and last few leaves, otherwise clean, binding tight. Sir John Francis Davis (1795-1890) was a British diplomat and sinologist who served as second Governor of Hong Kong from 1844 to 1848. This work was first published in 1830 in the Transactions of the Royal Asiatic Society. The Chinese characters in the present edition were produced using the original type imported by the Society from China. Part one of the text discusses versification -- "the particular rules which prevail in the mere construction of lines, couplets, and stanzas" -- and Part II offers "a general view of the style and spirit of Chinese poetry, the character of its imagery and sentiment, and the extent to which it seems to admit of a precise classification, relatively to the divisions and nomenclature adopted in European literature. (Inventory #: 21329)
$250.00 add to cart or Buy Direct from Walkabout Books
Share this item