Twelve Against the Gods; The Story of Adventure 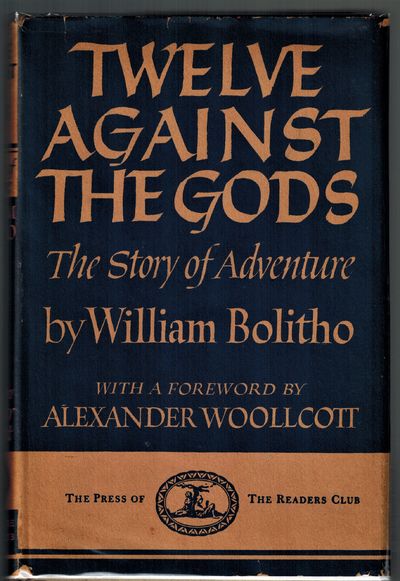 by Bolitho, William; With a foreword by Alexander Woollcott
New York: The Press of The Reader's Club, 1941. First Reader's Club Edition, 1941. With Foreword by Alexander Woollcott and Author's Introduction. First published 1929 by Simon and Schuster. Near Fine, light toning to end pages and spine, in a Near Fine dust jacket, Reader's Club promotional and ordering card tipped to front flap, as issued, and very light edge wear. SCARCE in either edition in dust jacket, particularly so in one so lovely. The twelve subjects are Alexander the Great. -- Casanova. -- Christopher Columbus. -- Mahomet. -- Lola Montez. -- Cagliostro (and Seraphina). -- Charles XII of Sweden. -- Napoleon I. -- Lucius Sergius Catiline. -- Napoleon III. -- Isadora Duncan. -- Woodrow Wilson. William Bolitho Ryall (18911930), died a year after the publication of this book, at the age of 39."We are born adventurers, and the love of adventures never leaves us till we are very old; old, timid men, in whose interest it is that adventure should quite die out. This is why all the poets are on one side, and all the laws on the other; for laws are made by, and usually for, old men." Introduction to Twelve Against the Gods, p. 14.. First Reader's Club Edition. Cloth. Near Fine/Near Fine. 8vo - over 7¾" - 9¾" tall. (Inventory #: 008495)
$500.00 add to cart Available from
Dale Steffey Books
Share this item
Dale Steffey Books
Offered by