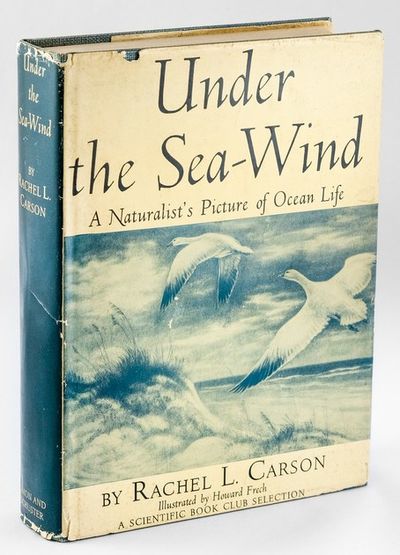 by CARSON, Rachel
NY: Simon & Schuster. 1941. Her uncommon first book, published ten years before her second and twenty years before Silent Spring. Under the Sea-Wind, was released in 1941, unfortunately just weeks prior to the bombing of Pearl Harbor. As a result of the war, the book did not sell well, and Carson's next book wasn't published for another decade. After the success of The Sea Around Us in 1951, Oxford University Press reissued this title and it became a bestseller and a Book of the Month Club selection, paving the way for Carson to have enough clout within the publishing world to bring her classic, Silent Spring, into print a decade later. Owner name stamp and address on the front pastedown under flap; a near fine copy in a very good dust jacket with shallow edge wear and minor foxing on the verso. Scarce in the original edition and in dust jacket. (Inventory #: 034733)
$2,000.00 add to cart Available from
Ken Lopez - Bookseller
Share this item