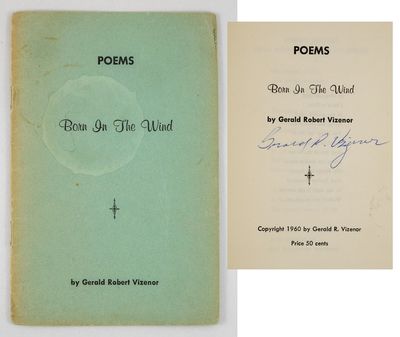 by VIZENOR, Gerald
(n.p.): (Self-Published). 1960. Vizenor's scarce first book: a small book of poetry, privately printed. Signed by the author. Vizenor, an enrolled member of the Minnesota Chippewa tribe, is a writer, scholar and activist whose work reenvisions and redefines the history of Native American culture and its role in the history of the United States, often using postmodern techniques, unconventional vocabulary, and humor, among other things. In addition to poetry -- including haiku -- he has written some 30 works of fiction and nonfiction, always seeking to redefine the Native American experience on its own terms, not those of a conquering and occupying society. In doing so he has become one of the most respected and most influential voices among Native American writers. Twelve unnumbered pages, in green stapled wrappers. Light cup ring on the front cover; spine and edge-toning; telephone number in pencil on rear cover. Still a very good copy. 4 copies listed in OCLC: this is the first copy of this title we've handled. (Inventory #: 034731)
$1,500.00 add to cart Available from
Ken Lopez - Bookseller
Share this item

NY : Simon & Schuster , 1941
(click for more details about Under the Sea-Wind)
View all from this seller>