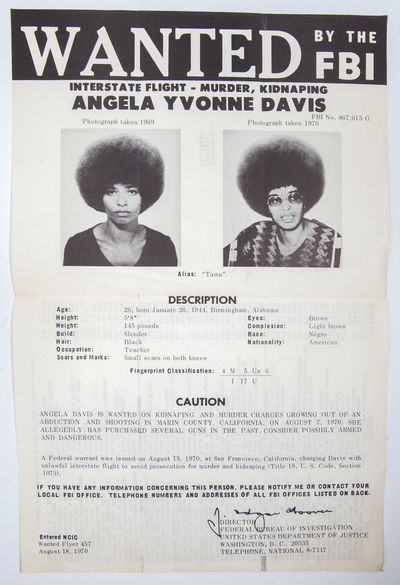 by [Davis, Angela Yvonne] [Black Panthers]
Washington DC, 1970. First edition. First issue, with the earlier date in August and no printed fingerprints. Measuring 10.5 x 15.75 inches with one horizontal and two vertical original fold lines for mailing. Recto with images of Davis, along with charges, warrant information, description, and facsimile signature of FBI Director J. Edgar Hoover. Verso with contact information for U.S. field offices and shipping address to the Postmaster of Hatfield, PA. Slight offsetting at foot of poster and pinhole separation to the horizontal fold not affecting text. In all, a marvelously preserved example of this scarce piece of history, which OCLC records at only two institutions.

The third woman in history to be placed on the FBI's 10 Most Wanted list, Angela Y. Davis was and remains an activist for Black American equality. The present poster, issued on August 18, 1970, was printed three days after a warrant was issued for her arrest for "interstate flight -- murder, kidnaping [sic]." And it warns the public and officers that "Angela Davis is wanted on kidnaping and murder charges growing out of an abduction and shooting in Marin County, California on August 7, 1970. She allegedly purchased several guns in the past. Consider possibly armed and dangerous."

The events of August 7, 1970 unfolded as a reaction to the prosecution of the Soledad Brothers, a group of three Black American inmates charged with the murder of a prison guard at Soledad State. Seventeen-year-old Jonathan Jackson kidnapped Superior Court Judge Harold Haley from the Marin County Civic Center in San Rafael, California as a tool to negotiate the freedom of the Brothers (George Jackson, Fleeta Drumgo, and John Clutchette), the first of whom was his biological brother. "Jackson, heavily armed, took over the courtroom in Marin County, arming the defendants and taking Judge Haley, the prosecutor, and three female jurors hostage. In a firefight that broke out as they attempted to leave the scene, Judge Haley, the defendants, and Jonathan Jackson were killed. In the ensuing investigation, it was discovered that the shotgun used to kill Judge Haley had been purchased by Angela Davis" (Peterson). Maintaining her innocence, Davis fled and went into hiding, before being found by New York FBI agents two months later. Davis' experience of arrest, solitary confinement, and movement through the American legal process only bolstered her understanding of how it was shaped by systemic racism. It also brought the fundamental biases of the system into a national spotlight, as Davis was eventually found innocent by an all-white jury. "The case marked a tremendous moment not only for Davis, but for the Civil Rights Movement and the Black Panther Party" (Peterson). Davis was and remains one of the most outspoken and influential voices in the pursuit of Black American equality, continuing her work as an educator and an activist. (Inventory #: 3949)
$1,250.00 add to cart or Buy Direct from
Whitmore Rare Books
Share this item