Botanical Dialogues between Hortensia and her four children...Designed for the Use of Schools 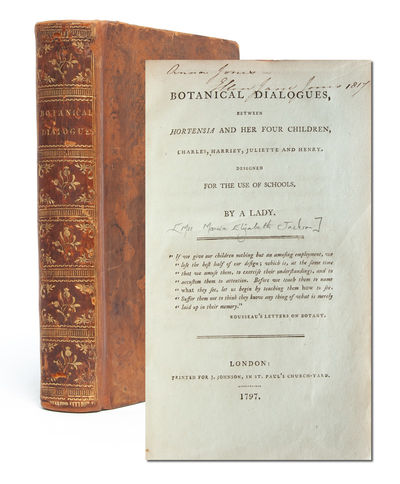 by [Jackson, Maria Elizabeth] A Lady
London: Printed for J. Johnson in St. Paul's Churchyard, 1797. First edition. Contemporary tree calf rebacked and retaining the original spine stamped in gilt. Gentle bumps to corners. Early gift inscription to front endpaper: "Margaret Ellen Bivan, with Aunt Ellen's kind love." Additional early gift inscription to header of title: "Aunt Jones -- Ellen Jane Jones, 1817." Occasional discrete pencil marginalia, largely unmarked. Measuring approximately 125 x 210mm with wide margins, and collating xlvi, 335, [3]: bound without half title, else complete with all 11 plates, the advertisement to the front and the directions to the binder at the rear. A scarce and very early scientific work by a woman, ESTC reports copies at 13 U.S. institutions, with only two copies appearing at auction in the last 24 years. The present is the only first edition on the market.

An early example of the work of women citizen scientists, who sought to use the dialogue form to welcome girls into a variety of fields including botany, conchology, and entomology which they could study from home. Jackson was among the very first women in England to publish a book of this kind, predated only by Priscilla Wakefield's botanical book a year earlier. Structured for ease of use by governesses, headmistresses, mothers, and students themselves, Botanical Dialogues opens with a contents section that includes in-depth analyses of each dialogue to assist in instruction. From here, the main text of the book follows the wise and knowledgeable Hortensia (a name with dual reference to the flower and to the Roman orator who argued for the repeal of taxes against women) and her children Charles, Harriet, Juliette, and Henry as they observe the natural world. The lessons are set in Socratic form, frequently with Hortensia asking her children what they see and pressing them toward what that might teach them about flora; at other times, the children's questions drive the lessons. Throughout, Hortensia never reduces the rigor of her lessons, though she may break down and explain more complex concepts of plant anatomy or reproduction. "A densely packed book about Linnean nomenclature and taxonomy, it contains reproductions of the parts of plants, discusses modes of flowering, classes, genera and orders to that students can identify plants. The author did not believe in oversimplifying the Linnaean system to popularize it...a provincial gentlewoman who lived with her brother, Jackson met Erasmus Darwin through her cousin; this connection enabled her to live on the fringes of the literary and scientific cultural life of the men around her. Some conjecture that Botanical Dialogues was written for the Parker sisters, Darwin's illegitimate daughters who kept a school" (MSU). Along with her small cohort, Jackson helped usher in a new model of education that aided women in joining scientific discussion.