Report Upon Samoa, or The Navigator's Islands, Made to the Secretary of State 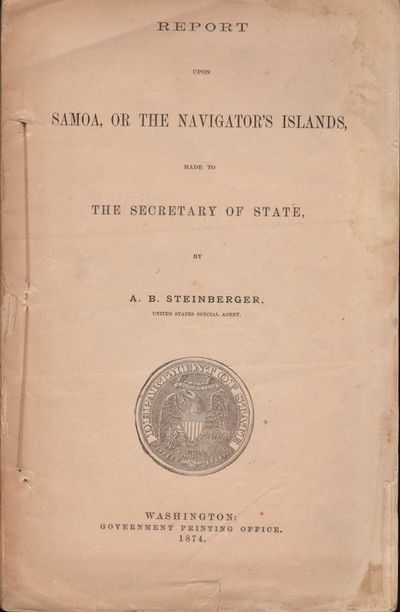 by Steinberger, A. B. (United States Special Agent)
Washington DC: Government Printing Office, 1874. First Edition. Wraps. Good. Stitched wraps. Approx. 9" x 6". 58 pages. A few small edge tears to the spine and edges. Light toning to the paper. This report was made while U.S. Grant was President. From wikipedia: Samoa is a unitary parliamentary democracy with eleven administrative divisions. The sovereign state is a member of the Commonwealth of Nations. Western Samoa was admitted to the United Nations on 15 December 1976.[8] The entire island group, which includes American Samoa, was called "Navigator Islands" by European explorers before the 20th century because of the Samoans' seafaring skills.[9][10] The country was occupied from 1899 until 1915 by the German Empire. From 1915, occupation continued via a joint British, New Zealand colonial administration until independence was achieved in 1962. (Inventory #: 22200)
$50.00 add to cart or Buy Direct from Americana Books
Share this item

Boston : Little, Brown & Co , 1939
(click for more details about Ben and Me A New Astonishing Life of Benjamin Franklin As Written by his Good Mouse Amos)

Binghampton, New York : Vigilance Publishing Company , 1924
(click for more details about Vigilance A Champion of Militant Americanism)
View all from this seller>