History of a Felling. 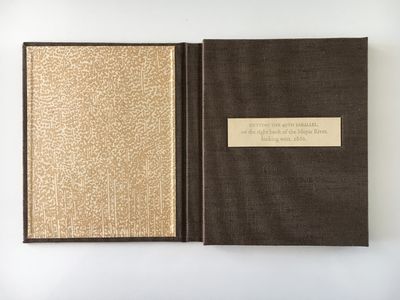 by Covell, Anne.
La Mesa, California:: Sin Nombre Press,, 2019.. Edition of 18. 5.75 x 4.75 x .5 inches (closed); 5.75 x 4.75 x 18 inches (open). Tunnel book structure. . Images made from polymer plates created from film ink hand-painted on Yupo paper. Letterpress printed on Sakamoto and Kitakata papers. Laid in cloth covered box with colophon tipped in bottom interior. Numbered. Signed by the artist.. Anne Covell: "In 1846, the United States and Great Britain signed the Oregon Treaty to make the 49th Parallel the boundary between the United States and British North America, later known as Canada. The two countries formed the International Boundary Commission to survey and establish what is now Washington State's northern border with British Columbia. Starting at Point Roberts and working east across the Northern Cascades, a team of workers physically marked the border by clear-cutting a 20-foot wide swath through the rugged, previously undisturbed terrain. By 1860, a primitive line running from the Pacific Ocean east to the summit of the Northern Rockies had been established. It would take another 15 years to clear-cut the 5,525 miles in total separating the US from present day Canada. Today, the swath cuts through numerous protected parks and natural reserves, including the Northern Cascades National Park and the Waterton-Glacier International Peace Park, severing common ecologies and shared landscapes simply because they straddle this political divide. "'History of a Felling' was first conceived during the winter of 2014 while at the Penland School of Crafts on a winter residency in letterpress.  The project was filed away while the concept evolved into a body of work that would become Covell's graduate thesis, 'Towards a Just Landscape,' in 2015. In the intervening years, the US/Mexico border would draw global attention for the deeply contentious debate over the compulsion to secure the southern border through the construction of a border wall. It seemed a particularly poignant time, by comparison, to revisit the history of the US/Canada border felling, and so the project came out of storage. In many ways the southern and northern US border conflicts remain as isolated as their geographical latitudes; however, their ethical and environmental costs deserve equal scrutiny. Over 150 years later, the deforestation continues. Nature inevitably begins to rebound - trees, shrubs, and grasses grow - and every six years the swath is cleared through exhaustive manual labor." (Inventory #: 23077)
$650.00 add to cart Available from Vamp & Tramp
Share this item
Vamp & Tramp, Booksellers, LLC
Offered by