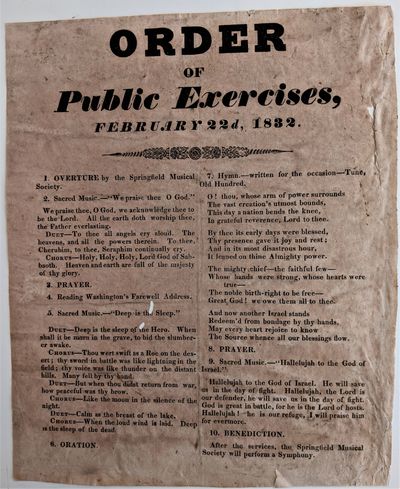 by (Washington, President George)
N.p., (Springfield, Massachusetts?), 1832. Small folio broadside. 290 x 235 mm., [11½" x 9-3/8"]. Paper stock toned to brown.   Small interior tear and two tiny holes, but just touching two letters. Caption title in large, bold type.   Broadside publication documenting the ceremony celebrating the one hundredth anniversary of the birth of President George Washington.  The program includes a reading of Washington's Farewell Address, a prayer and benediction, interspersed with a number of selections performed by the Springfield Musical Society.  The reading of Washington's Adddress was conducted in  ceremony after ceremony around the country and became an essential element of celebration once it was established as a federal holiday by an act of Congress in 1879.   In 1832, Henry Clay attempted to pass a bill which would have moved Washington's grave from Virginia to the District of Columbus, resulting in a clash of Northern states against Southern states about overreach of Federal powers and sovereignty of States rights.  A member of the Washington family, declined the opportunity putting the issue to rest and postponing any national celebration for another forty-five years.  See the National Archive and Mount Vernon websites under "George Washington's Birthday" for further discussion of the politics surround the birthday celebration.   Not listed in OCLC under title, nor in American Imprints for years 1830-39. (Inventory #: 695)
$350.00 add to cart Available from
De Simone Company
Share this item
De Simone Company, Booksellers
Offered by