Anacreon, done into English out of the original Greek by Abraham Cowley and S.B. 1683, newly embellished with copperplate engravings by Stephen Gooden 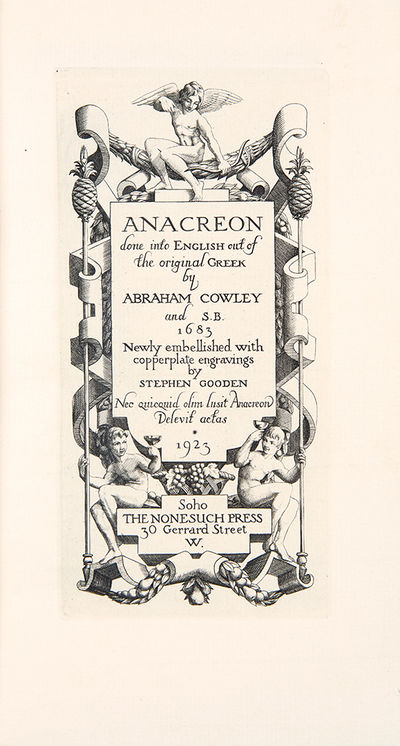 by COWLEY, Abraham (1618-1667), translator; and Stephen GOODEN (1892-1955), engraver
Soho: The Nonesuch Press, 1923. Octavo. (9 1/4 x 5 1/4 inches). 52, [4]pp. 7 copper engravings. Presentation copy to J. H. S. McArthur from Sir Sydney Cockerell. Quarter vellum over gold paper boards. Minor wear at board edges, light foxing to endpapers. One of only 725 copies produced, reprinted from the 1683 edition. Founded in 1922, Nonesuch Press was a private press founded by a husband and wife, and their friend in the basement of Birrell & Garnett's bookshop on Gerrard Street in Soho, London, of which their friend was co-owner. The press produced around 140 books on poetry and literature, reaching its peak production in the 1920s and 30s. It used a small hand press to design books but printed them via commercial printer, resulting in high-quality designs with the capability of a large distribution. Abraham Cowley was one of the leading British poets of the 17th century, admired and known for his elaborate, decorative language. Dreyfus 12. (Inventory #: 38849)
$125.00 add to cart or Buy Direct from
Donald A. Heald Rare Books
Share this item
Donald A. Heald Rare Books
Offered by