The Rise of the Dutch Republic: A History 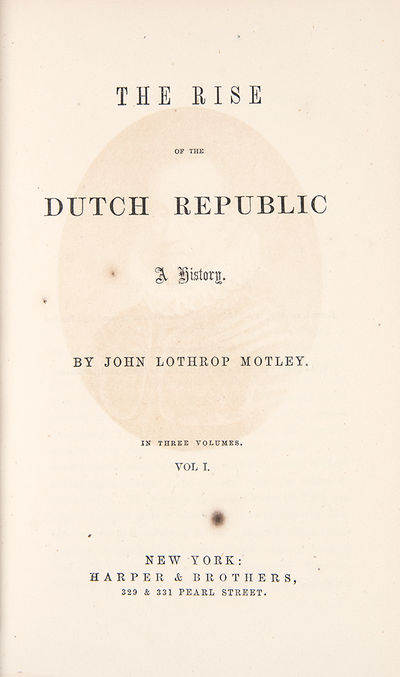 by MOTLEY, John Lothrop (1814-1877)
New York: Harper & Brothers, 1855. 3 vols, octavo. (8 13/16 x 5 3/4 inches). 579, frontispiece; 582; 664pp. Contemporary half tan calf, spine richly gilt in six compartments, red and green morocco lettering pieces, marbled endpapers. Fine. A complete set of the first edition of this important work. John Lothrop Motley was an American diplomat and historian, known for his most famous work, "The Rise of the Dutch Republic," which detailed the dramatic events of the Eighty Years' War, the Dutch revolt against Spanish rule in the 16th century. The work became a bestseller in the United States and dominated Americans' perceptions of the Dutch war for independence for some fifty years. (Inventory #: 38854)
$200.00 add to cart or Buy Direct from
Donald A. Heald Rare Books
Share this item
Donald A. Heald Rare Books
Offered by

London : Faber and Faber , 1940
(click for more details about No More Ghosts: Selected Poems)
View all from this seller>