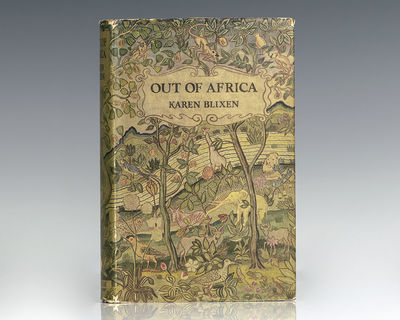 by Dinesen, Isak [Karen Blixen]
London: Putnam, 1937. First British edition of the author's masterpiece, a lyrical meditation of the years she lived in Kenya, from the library of King Edward VIII. Octavo, original cloth. Near fine in a near fine dust jacket with a touch of rubbing. An exceptional example, uncommon in this condition. From 1914 to 1931, Danish aristocrat Baroness Karen Blixen owned and operated a coffee plantation in Kenya. After the plantation failed, she returned to Europe and began to write under the pen name Isak Dinesen. Out of Africa reads like a collection of stories in which she adheres to no strict chronology, gives no explanation of the facts of her life, and apologizes for nothing. Basis for the film bearing the same name, directed by Sydney Pollack, starring Robert Redford and Meryl Streep, which went on to win seven Academy Awards. Named by Modern Library as one of the 100 best non-fiction books of the twentieth century. (Inventory #: 118446)
$6,000.00 add to cart or Buy Direct from
Raptis Rare Books
Share this item