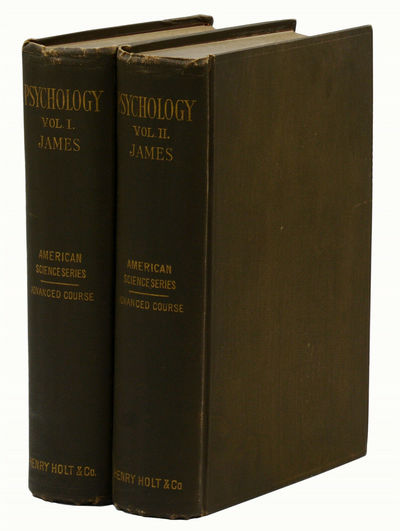 by James, William
New York: Henry Holt and Company, 1890. First Edition. Near Fine. First edition, first printing, first issue. Title pages dated 1890, the word "Psy-chology" hyphenated on ads pages facing title pages; definitive errors present on p. 10 of Vol. 1 ("the seat of intellectual power") and p. 101 in Vol. 2, "object of some absent object of sensation." McDermott 1890-4. xii, 689; vi, 704, 8 pp. Two volumes. Publisher's dark green cloth with gilt spine lettering, dark brown endpapers. A Near Fine set: bright, sturdy, and unsophisticated. A little wear at head and tail, slight rubbing and light foxing to top edge, corners slightly bumped; some typical faint swirl patterns to the outer layer of the cloth that is most noticeable in Vol.2. Excellent copies of the foundational psychology text's notoriously rare first issue. In this 1300+ page masterwork , a summary of his productive years at Harvard, James emphasized his experimental method and the treatment of psychology as a natural science. He argued that mental processes should be viewed as "activities [useful] to living creatures as they attempt to maintain and adapt themselves in the world of nature" (Duane Schultz A History of Modern Psychology, 3rd ed.). Stanford Encyclopedia of Philosophy called this "a rich blend of physiology, psychology, philosophy, and personal reflection that has given us such ideas as 'the stream of thought' [better known as the "stream of consciousness"] and the baby's impression of the world as 'as one great blooming, buzzing confusion.' It contains seeds of pragmatism and phenomenology, and influenced generations of thinkers in Europe and America." A seminal work in the history of modern thought. (Inventory #: 140940383)
$9,500.00 add to cart Available from
Burnside Rare Books
Share this item
Burnside Rare Books
Offered by

The Scientist as Rebel

Nothing like the Sun: A Story of Shakespeare's Love Life

London : William Heinemann Ltd , 1964
(click for more details about Nothing like the Sun: A Story of Shakespeare's Love Life)
View all from this seller>