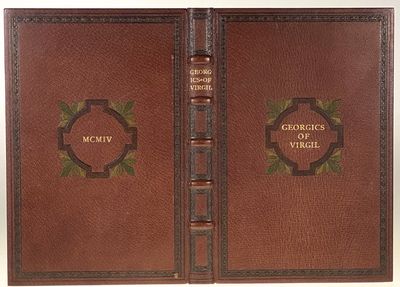 by Mackail, J.W. (transl.)
Boston: Houghton Mifflin and Company at the Riverside Press, 1904. First edition thus. First edition thus. Exquisitely bound by L. Averill Cole in terra-cotta pigskin, blind-tooled with hundreds of inlays, an aesthetic and technical masterpiece. A mosaic border in dark brown and green, composed of over five hundred small inlays, blind-tooled, surrounds a central design, inlaid in shades of dark brown and green. The spine is beautifully designed with five well-rounded bands and six compartments, five of which contain the same inlaid mosaic patterning, gilt lettering on second compartment. Front cover with the title, the rear cover with the date, MCMIV, both in gilt. TEG. Elegant green silk fine-grained doublures and matching free endsheet, wide dentelles with same terra-cotta theme, containing the inlaid designing. Signed in rear lower left in gilt pallet: "L. Averill Cole." This binding is pictured in Robert Seaverís ìAmerican Bookbindings,î in the American Printer, ca. 1910. Seaver remarks, ìThe combination of the square with the Roman half arch is distinctly appropriate to a binding in the style of the early Roman empire, while the conventional representation of the Roman Palmette is inlaid in shaded tones of green. Before designing this binding, Miss Cole examined hundreds of Roman architectural plates, in order to secure an original and at the same time an authentic treatment.î Designed and printed by Bruce Rogers at the Riverside Press, with decorative title page in red-brown, initials throughout. Very fine condition, no signs of wear. In contemporary two-part solander book case, full leather-lined, opening at the top. L. Averill Cole, noted and accomplished American woman bookbinder and designer, was from California, but early on studied under Louis Jacobs and Joseph Hendriks in Belgium ca. 1905. She won first prize at an important international bookbinding exhibition in Brussels in 1905, worked in England with Mary Noble whom she met through Douglas Cockerell, and was the first to teach Noble bookbinding. Finally returning to America in 1908, Cole took a lead position as head bookbinder at Houghton Mifflin's Riverside Press in Cambridge, MA. where she produced bindings of top quality for four years. The present binding, therefore, is dated between 1908-1912. A thoroughly captivating binding in very fine condition, superbly matching the content and design of Bruce Rogers in a rich and expressive styling. (Inventory #: 4948)
$7,500.00 add to cart or Buy Direct from
Nudelman Rare Books
Share this item