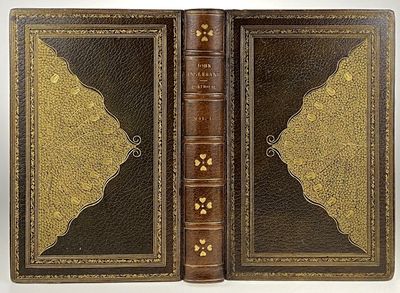 by Shorthouse, J. Henry
London: Macmillan and Co, 1881. Two volumes. A magnificently detailed and stunning binding by Johanna Birkenruth, with a magnificent gilt blocked design on both covers (thus repeated four times) consisting of tulips emanating from a central point along the outer edge and spanning in a semicircle across the covers, and of note, the background is fully stamped in double nailheads, making the whole of the background nearly solid and giving a wonderful effect. Three sets of concentric rectangular gilt filet rectangles with interweaving borders balance out the design on both covers. Spines with five bold raised bands, four compartments with large arrayed solid hearts, the others with gilt lettering. Superb gilt dentelles with innovative and intricate heart, devices and gilt stippling, marbled doublures and free endpapers. Signed by Johanna Birkenruth in her characteristic printed stamp at the top of the second leaf, "Johanna Birkenruth, London." Johanna Birkenruth (1853-1929) was a noted bookbinder in London who became associated with the Guild of Women Binders (though never joined) and established herself as one of the leading bookbinders in the late 19th Century in England. She quickly attained her own independent reputation as being a highly innovative and technically accomplished bookbinder, as early as 1889, and began showcasing her bindings in the top exhibitions of the period. Birkenruth was well-known in London at the Turn of the Century, as well as today, for her embroidered bindings, gouged designs, and idiosyncratic, innovative gilt stamped motifs. One of her bindings displayed at the Arts & Crafts Exhibition in 1897, was instrumental in inspiring Frank Karslake to found the Guild of Women-Binders. According to one admirer, her workshop on Cromwell Road in 1895, has become ìa thoroughly artistic abode where ìpurchasers, and visitors merely desirous of inspecting, are equally welcome.î In 1901, Sangorski & Sutcliffe set up on their own shop after working for Douglas Cockerel, and soon taught a number of pupils, but none so renowned as Sarah Prideaux and Johanna Birkenruth, who learned the rare art of design and finishing from these master bookbinders. Birkenruth went on to become highly networked and independently produced superb bindings to the upper end collectors of the day, including a wonderful gouged full pigskin binding for the celebrated Kelmscott Chaucer. It has been said that Johanna Birkenruth was the first women to give formal lessons in bookbinding. Volume One with edgewear along the seam of the spine that could do well with repair. Volume two has been expertly repaired at the hinges, corners bumped occasional wear to corners and sides, all four covers very nice, near fine. A wonderful and scarce Birkenruth binding. (Inventory #: 4946)
$3,250.00 add to cart or Buy Direct from
Nudelman Rare Books
Share this item