A 4 Page Autographed Letter Signed from John ? Of Key West, Florida to Mary B. Shipman, March 4, 1845 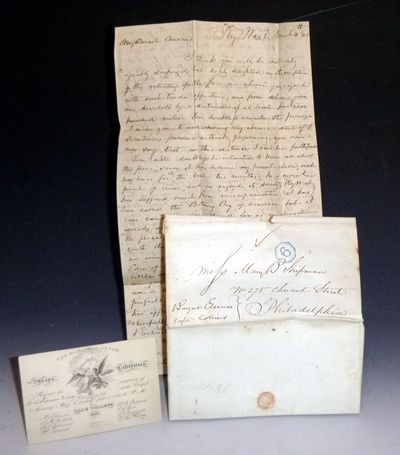 A 4 Page Autographed Letter Signed from John ? Of Key West, Florida to Mary B. Shipman, March 4, 1845. 4 page bifolium letter written from John (a cousin) of Mary B. Shipman which lauds the wonders of Key West in detail. Laid in is an invitation to the Yale College Junior Exhibition of 1819 to Mr. C. Shipman & lady. In the letter, he writes: that he has only been in Key West for two months but found what he had heard was a misrepresentation. It has been called the Botany Bay of America as regards to its climate, it is "the Eden of the World". He writes while laid up in bed (perhaps from malaria) [we are] completely surrounded by ocean, the island being four miles by three. Most of the fruits which abound in the tropics [are?]here. From the Piaza of my boarding house, I can see the Almond, the Coconut, the Lemon, the Orange, the Lime, the Fig and the Plaintin tree. And the flowers-Oh! The Oleander bushes and ware? plants the former in all its flowering glory, the latter, a perfect burning bush. The night blooming with the variety of the cactus species. I have seen the Column Cactus which derives its name from the Corinthian columns. I have seen them 15-20 feet and in circumference exceeds that of my leg. Don't blush now for ladies have no such circumferences, but if they had, I would say as large as two of theirs. [note: this was a time when no gentleman would mention that women had legs though they could refer to limbs]. I wish you could witness our sunsets. Italian sunsets and skies they will bear no comparison to those of Southern Florida. I could go on forever, but now let me tell you of the place where I domesticate. It is the house of Major Braeule? and his lady from Georgia. There are about twenty boarders. (Keep still), three married ladies and only one single lady of sweet seventeen (say nothing) of who she is in the of the place and my [French phrase, ohere arne?] if you don't know what that means ask the French Professor. We are all agreeable at times but there is a certain something in the atmosphere, which makes some folks a little pugnacious. We have plenty of turtle and fish but beef sells at an extravagant price of twenty cents, eggs 50 to 75 cents a dozen and milk 25 cents. On Valentine's Day we had a table with turtle and turtle soup, beef, hams, peas, potatoes and lettuce in the evening at ten, ?? what would be said of such dining in Philadelphia or New Haven in the midst of winter? This is a little world for the botanist, the coctholist, the itcholoist and the ornithologist. It is an island completely of plants, shells, fish and birds. But summer they say has yellow fever, mosquitoes and everything that is awful is in abundance. I have scarcely begun my letter and it is called to tell me the barque [Eleanor] is about to sail....good bye and my love to the folks. John If you send anything to me and I ? {send via Charleston??} send me a newspaper with your letter. The letter is enclosed in a letter addressed to Miss Mary B. Shipman, 275 Chesnut Street, Philadelphia, sent via the Barque Eleanor and Captain Collins. Note: the problem of the mail depending upon the use of a reliable ship sailing to Philadelphia. The Sunbury American of November 11, 1845 reports that the Postmaster General was looking for a mail service to cover Havana, Key West and New Orleans. Clearly, the letter would have been used had Key West had a Chamber of Commerce at the time. It had a total population of 688 (with 96 slaves) in 1840 but by 1850 it would grow to 2,645 (including 431 slaves) as Key West grew as maritime and military community with is produce making it a very valuable property. (Inventory #: 027981)
$250.00 add to cart or Buy Direct from
ALCUIN BOOKS, ABAA
Share this item