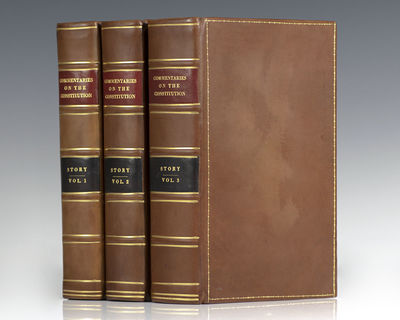 by Story, Joseph
Boston: Hilliard, Gray, and Company, 1833. First edition of one of the most significant early studies of the Constitution, second only to The Federalist in its era. Octavo, three volumes, bound in full brown calf, morocco spine labels, gilt ruled to the front and rear panels. In near fine condition with light toning to the text. A very sharp example. Story's Commentaries was the most substantial and influential work written on the American Constitution between the publication of the Federalist and the Civil War, and it remains an important work today. Written while Story was Dane Professor at Harvard Law School and an Associate Justice of the Supreme Court, it presented a strongly Nationalist interpretation. It is divided into three books. Book I contains a history of the colonies and discussion of their charters. Book II discusses the Continental Congress and analyzes the flaws that crippled the Articles of Confederation. Book III begins with a history of the Constitution and its ratification. This is followed by a brilliant line-by-line exposition of each of its articles and amendments. Comparing it to the Federalist, James Kent said that Story's work was "written in the same free and liberal spirit, with equal exactness and soundness of doctrine, and with great beauty and eloquence of composition. (...) Whoever seeks...a complete history and exposition of this branch of our jurisprudence, will have recourse to [this] work, which is written with great candor, and characterized by extended research, and a careful examination of the vital principles upon which our government reposes.": cited in Marvin, Legal Bibliography 669-670. Cohen, Bibliography of Early American Law 2914, Howes S1047, Sabin 92291. (Inventory #: 118376)
$8,500.00 add to cart or Buy Direct from
Raptis Rare Books
Share this item