The Grapes of Wrath. 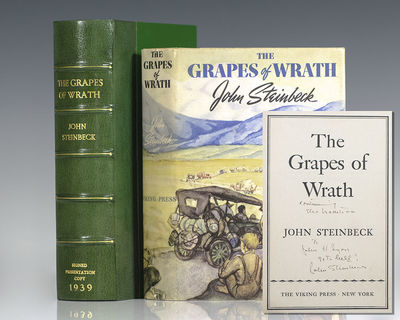 by Steinbeck, John
New York: The Viking Press, 1939. First edition, with "First Published in April 1939" on copyright page and first edition notice on the front flap of the dust jacket. Octavo, original beige cloth. Association copy, playfully inscribed by the author on the title page, "Continuing the tradition. To John H. Lyon, go to hell! John Steinbeck." The recipient was John Henry Hobart Lyon, an English professor at Columbia University and a friend of Steinbeck's. "Great names usually come in clusters, for one creative scholar attracts others to work with him. The unforgettable Professor John Henry Hobart Lyon stirs his students by his lectures on Shakespeare, romantic literature, and the world's masterpieces" (Coon, p. 33). Lyon also taught a popular course called "Literature of Today", for which he invited well-known contemporary authors to lecture. Among those who appeared were Thomas Mann, Kenneth Roberts, Orson Welles, Stephen Benet, Erskine Caldwell, Somerset Maugham, Moss Hart, and Eleanor Roosevelt. Near fine in a near fine dust jacket with a touch of shelfwear. Jacket design by Elmer Hader. Housed in a custom half morocco clamshell box. An exceptional example with noted provenance. "The Grapes of Wrath is the kind of art thats poured out of a crucible in which are mingled pity and indignation Its power and importance do not lie in its political insight but in its intense humanity [It] is the American novel of the season, probably the year, possibly the decade" (Clifton Fadiman). It is the basis for the 1940 John Ford directed film, bearing the same name starring Henry Fonda. It is widely considered as one of the greatest American films of all time. In 1989, this film was one of the first 25 films to be selected for preservation in the United States National Film Registry by the Library of Congress as being "culturally, historically, or aesthetically significant." Listed by Modern Library as one of the 100 best novels of the twentieth century. (Inventory #: 119562)
$25,000.00 add to cart or Buy Direct from
Raptis Rare Books
Share this item