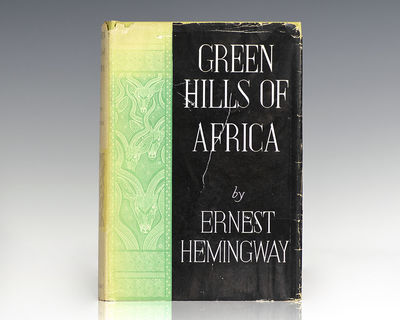 by Hemingway, Ernest
New York: Charles Scribner's Sons, 1935. First edition of Hemingway's second work of nonfiction, an account of a month on safari he and his wife took in East Africa during December 1933. Octavo, original green cloth, decorations by Edward Shenton. Near fine in a bright very good dust jacket. Green Hills of Africa was published in 1935, but initially appeared in Scribners Magazine the same year (Meyers, 1985). The first edition explains that Hemingway "attempted to write an absolutely true book to see whether the shape of a country and the pattern of a month's action can, if truly presented, compete with a work of the imagination." The author's intentions were quickly confirmed when the first print-run sold a popular 10,500 copies, and it was aptly praised by The New York Times as "[a] fine book on death in the African afternoon...The writing is the thing; that way he has of getting down with beautiful precision the exact way things look, smell, taste, feel, sound." Not unlike Hemingway's virtuosic abilities, Green Hills of Africa also offers the writer's opinions on the value of his contemporaries: "The good American writers are Henry James, Stephen Crane, and Mark Twain Henry James wanted to make money. He never did, of course." Hemingway adds that most American writers are inadequate and "came to a bad end" The value of Green Hills of Africa, therefore, is three-fold. It serves as masterly written entertainment, a successful social experiment that tested the receptivity of the American public, and an insight into the author's literary evaluation. The Observer is correct when it wrote, "If he were never to write again, his name would live as long as the English language, for Green Hills of Africa takes its place beside his other works on that small shelf in our libraries which we reserve for the classics." (Inventory #: 118564)
$1,400.00 add to cart or Buy Direct from
Raptis Rare Books
Share this item

Boston : Houghton Mifflin Company , 1998
(click for more details about The Affluent Society.)
View all from this seller>