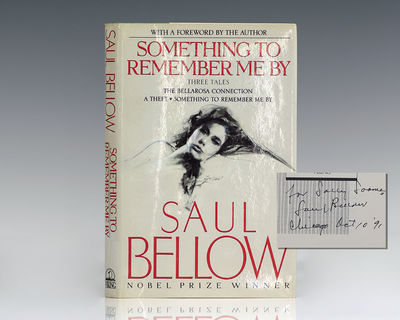 by Bellow, Saul
New York: The Viking Press, 1991. First edition of this trio of short works by the Nobel laureate and "greatest writer of American prose of the twentieth century" (James Wood, The New Republic). Octavo, original half cloth. Presentation copy, inscribed by the author on the title page, "For Sally Soames, Saul Bellow Chicago Oct 10 '91." The recipient, British photojournalist Sally Soames, worked for The Sunday Times from 1968 until 2000 and was highly regarded for her exclusively black and white portraits of many of the most prominent figures of the 20th century including Menachem Begin, Margaret Atwood, Margaret Thatcher, Sean Connery, Rudolf Nureyev, Alec Guinness and Andy Warhol. Soames, who was known to be a warm and personal journalist, performed extensive research on the subjects of her photographs and developed intimate rapports with them during her process resulting in intimate and revealing portraits. In addition to the several world leaders Soames came to know and photograph, she captured the creative energy and personality of some of the world's most gifted authors, poets, and playwrights. She published two books of photographs during her lifetime, Manpower (1987) with text by Robin Morgan and an introduction by Harold Evans and Writers (1995) with a preface by Norman Mailer. Fine in a fine dust jacket. Jacket design by Neil Stuart. Jacket illustration by Herb Tauss. While Saul Bellow is known best for his longer fiction in award-winning novels such as The Adventures of Augie March and Herzog, Something to Remember Me By will draw new readers to Bellow as it showcases his extraordinary gift for creating memorable characters within a smaller canvas. The loss of a ring in A Theft helps an oft-married woman understand her own wisdom and capacity for love. In The Bellarosa Connection, Harry Fonstein has escaped from Nazi brutality with the help of an underground organization masterminded by the legendary Broadway impresario Billy Rose, and his story continues in America . In the title story, seventeen-year-old Louie--whose mother is dying of cancer--strays far from home and finds not solace but humiliation and, ultimately, the blessing of his father's wrath. (Inventory #: 118778)
$475.00 add to cart or Buy Direct from
Raptis Rare Books
Share this item