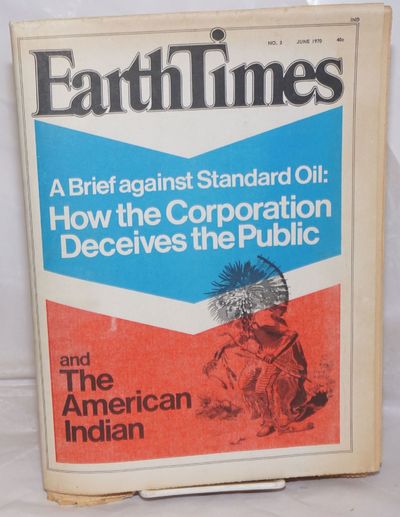 by Mills, Stephanie and Jon Carroll, editors, Larry Luce, Hal Aigner, Melvin Thom, Buffy Sainte-Marie, Barry Commoner, Kevin R. Gregg, et al.
San Francisco: Straight Arrow Publications, 1970. Newspaper. 40p., folded tabloid underground newspaper, articles, opinion, news, illustrations, photos, services and resources, moderate wear and toning, else very good newsprint. Two major pieces in this issue. An expose of Standard's deception of the Public and several pieces on Native Americans including a report on Alcatraz Island. There were only four issues of this noble but ill-fated attempt by Rolling Stone to launch a savvy monthly tabloid about ecology and the environment. The graphic design was virtually a clone of Rolling Stone, not surprising since the art directors were the same for each publication. Mills would go on to edit at Whole Earth's CoEvolutionary Quarterly and the Friends of the Earth's Not Man Apart, while Carroll edited the doomed hip fashion magazine Rags, then New West (New York magazine's attempt to duplicate its success on the West Coast), and finally settled down to a decades-long gig as a witty and thoughtful columnist for the S.F. Chronicle. (Inventory #: 256722)
$20.00 add to cart or Buy Direct from Bolerium Books
Share this item

The rebel at large

Girard, KS : Press of Appeal Publishing Company , 1905
(click for more details about The rebel at large)