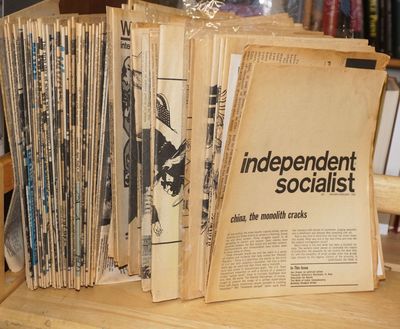 by Hal Draper and Kim Moody, ed
Highland Park, MI: I.S. Publishing, 1977. Newspaper. 102 issues. The paper was produced bi-monthly, mothly, bi-weekly and weekly, varying publication schedules. Folded tabloid but the first 6 issues were printed in newsletter format. Started as "Independent Socialist" in 1967. In September of 1970 the name changed to "Workers Power". This in an incomplete run of the paper. Includes issue Jan-Feb 1967, vol. 1, no. 1 and over the next 102 issues a fragmentary run is completed in Mar 28, 1977 issue No. 200. Pages have severe aging, various small stains, shelf worn and edge worn but generally in good condition. The International Socialists came into being in the late 1960s around Trotskyist intellectual Hal Draper, though Draper never joined the organization, he edited the early editions of "Independent Socialist". With a heavy orientation toward the industrial unions the paper through out it's run focuses heavily on the union movement. (Inventory #: 256726)
$100.00 add to cart or Buy Direct from Bolerium Books
Share this item