[WWI GERMAN PSY-OPS]. "Dear Tommy, Thanks for the loan of this ground, it served its purpose. Now you are welcome to have it back. FRITZ 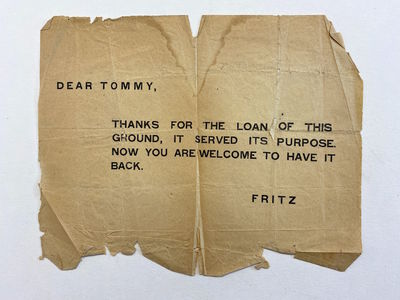 by Original WWI German Psychological Operations Leaflet
Germany (?), n.d. (but WWI era). Leaflet printed on thin paper, recto only, measuring approximately 8 1/4 inches by approximately 6 1/2 inches, single fold, torn around edges, staining at the top. WORDS AS SWORDS, HASTILY PRINTED ON CHEAP PAPER: PSYCHOLOGICAL WEAPONS IN THE TRENCHES. An astonishing WWI relic of Germany's Psy-Ops on Allied troops, this battered leaflet was carefull left for an Allied soldier on the battlefield. It was in "The Great War" that modern psychological operations began, resulting from faster and more efficient printing, and the ability to distribute propaganda leaflets by airplane to enemy soldiers and civilians alike. We have seen reference to two other examples of our leaflet: both were found by Allied soldiers inside trenches that the German army had just vacated, in other words: NOT scattered randomly by air, but "delivered by hand" to -- and from -- unknown enemies. A "sister" leaf is at the Staatsbibliothek zu Berlin: it was printed on the same type of paper and utilizing the same font as ours. As here, it was addressed DEAR TOMMY and signed FRITZ: "You are quite welcome to what we are leaving. When we stop we shall stop, and stop you in a manner you wont appreciate." (SBB Einbl. 1914/18, 1224.D1). (Inventory #: 3227)
$1,250.00 add to cart or Buy Direct from
Michael Laird Rare Books
Share this item

Phoenixiana; or, Sketches and Burlesques

New York : Appleton and Company , 1884
(click for more details about Phoenixiana; or, Sketches and Burlesques)

Harrisonburg, Virginia : Ananias Davisson , 1818
(click for more details about The Mountaineer)
View all from this seller>