CARRIER'S ADDRESS TO THE PATRONS OF THE DEMOCRAT AND REFLECTOR. JANUARY 1, 1864 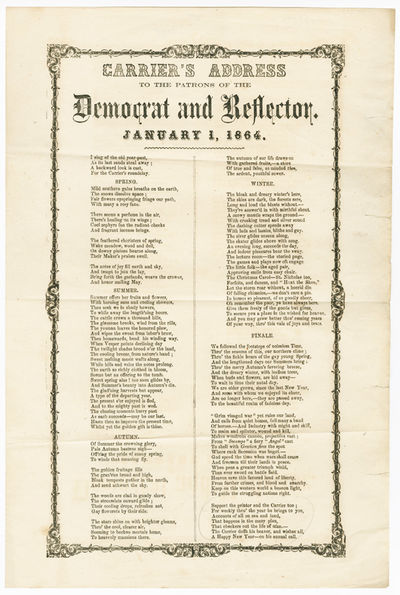 by [Carrier's Address]: [Civil War]
[N.p., but likely Schenectady, N.Y., 1863. Letterpress broadside, 15 x 10 inches, text surrounded by ornamental border. Old folds, four short horizontal closed tears to right edge, expertly repaired on verso. Light penciled parentheses marks around final stanza. Very good. A rare example of a Civil War-era carrier's address produced by the printer's apprentice of the "Democrat and Reflector." This is very likely a reference to the SCHENECTADY DEMOCRAT AND REFLECTOR, which ran from 1860 to 1867 in that city. For over 200 years, carrier's addresses were printed by the apprentices (or "printer's devil") at printing shops around the world, and handed out on New Year's Day by carriers of newspapers in an attempt to solicit tips and gifts from loyal patrons. This extra income was an important supplement for apprentices, who often worked unpaid positions just to gain experience. The present example prints a long poem divided into the four seasons, with a "Finale" added after the winter stanza. The author of the poem begins, "I sing of the old year past" and follows with a long poem beginning in the spring, as its "Mild southern gales breathe on the earth" and "notes of joy fill earth and sky." The summer "offers her fruits and flowers." In the autumn, "Bleak tempests gather in the north." And winter arrives "bleak and dreary" though there is mention of "The Christmas Carol - St. Nicholas too." Lastly, in the "Finale," the author includes an entire stanza on the current Civil War, which begins: "'Grim visaged war,' yet rules our land, And calls from quiet homes, full many a band Of heroes. - And Industry with might and skill, To maim and splinter, wound and kill, Makes wondrous cannon, projectiles vast; From 'Swamps' a fiery 'Angel' cast To shell with Grecian fires the spot Where rank Secession was begot." The address concludes with a call to "Support the printer and the Carrier, too" as "The Carrier dofts his beaver, and wishes all, A Happy New Year - on his annual call." No copies of this address appear in OCLC. (Inventory #: WRCAM56092)
$650.00 add to cart or Buy Direct from
William Reese Co. - Americana
Share this item