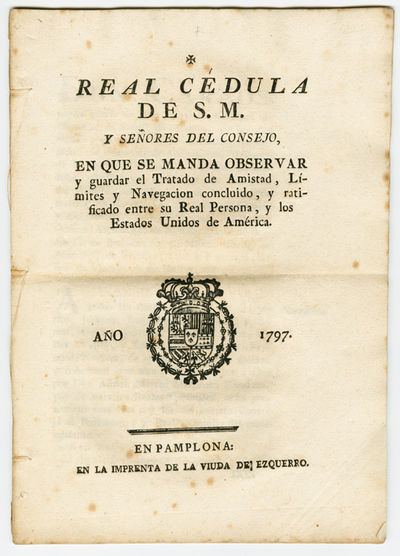 by [Pinckney's Treaty]
Pamplona: En la Imprenta de la viuda de Ezquerro, 1797. 43pp. Folio. Gathered signatures, stitched. A bit of light foxing. Very good. The extremely rare Pamplona edition of this far-reaching treaty between the United States and Spain, printed the year after the Madrid first edition. The treaty (usually known as Pinckney's Treaty after its American negotiator, Thomas Pinckney) was finally concluded at San Lorenzo el Real in October of 1795, marking the end of the long American diplomatic effort to conclude a treaty with Spain. Various clauses of the treaty define the boundaries of Florida and mark the Mississippi as the definite boundary between Spanish Louisiana and the settlements of the United States; and most significantly, the treaty secures common navigation of the Mississippi for Americans and Spaniards, and the use of the port of New Orleans for American shipping. Since receiving Louisiana from the French in 1763, Spain had asserted her absolute right to the navigation of the Mississippi. To American western settlers, the concession of free navigation was of paramount importance in opening the commerce of the Mississippi Valley. Equally important, by this treaty the last major European power involved in the American Revolution fully accepted the boundaries of the United States and gave it complete recognition. This Pamplona edition is at least as rare as the Madrid edition, which fetched $5000 at the Streeter sale in 1967. PALAU 250427. MEDINA 5765. STREETER SALE 1524 (ref). SERVIES 715 (citing Alcala ed). (Inventory #: WRCAM56022)
$4,250.00 add to cart or Buy Direct from
William Reese Co. - Americana
Share this item