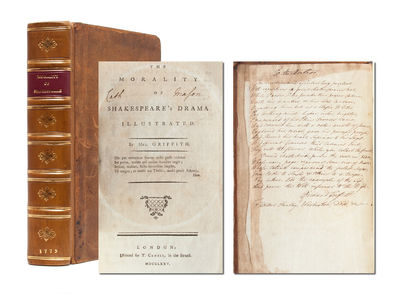 by [Griffith, Elizabeth] Mrs. Griffith
London: T. Cadell in the Strand, 1775. First edition. Contemporary calf rebacked to style with morocco spine label, and retaining contemporary boards. Pages measuring 200 x 120 mm and collating complete including frontis: xiii, [3], 528. A square, tight, pleasing copy. Early ownership signature of Catherine Mason to title page. Offsetting to front and rear pastedowns. The mildest offsetting to title page from frontis. Frontis trimmed a bit close on the outer edge, not affecting text or image. A scarce book of literary criticism, which last appeared at auction in 1974, the present copy was owned by the author and her husband. In it, Richard Griffith writes and signs an original holograph poem "To the Author" on the verso of the front endpaper, proclaiming her a "chaste scribe" responsible for crowning Shakespeare with "a nobler wreath of fame." Indeed, in highlighting morals and virtue in literature, Richard asserts, Elizabeth should "add the example of thy Life, and prove the Wits inferior to my Wife."

At a time when Voltaire and his literati questioned the artistic value of Shakespeare's works, a group of Bluestockings rose up in his defense, positing his lasting importance. While Charlotte Lennox's three volume Shakespeare Illustrated (1753-1754) laid the groundwork for female literary critics' involvement with the Bard, "Griffith's work paved the way for an emerging critical association between Shakespeare and national identity that was to gain strength and dominate literary criticism in the Romantic period and beyond" (Eger). Unlike Lennox, who tagged Shakespeare as unoriginal and lacking in rigor at times, Griffith asserts that "he is a Classic, a contemporary with all ages"; and she draws attention both to his enhancement of the English language as well as to the very British "code of morality" that he infuses into his plays. "My intention in this work was not only to propound the beauties of the Poet, but to expound the document of the Moralist...I have ever thought him by much the greatest poet of our nation...I am of an opinion that we need not surrender the British Palm either to the Grecian Bay or the Roman Laurel." Rather than privileging the classical writers of antiquity and losing sight of the contributions of their own countrymen, the British should celebrate how one of their own has shaped the world. In The Female Spectator, contemporary Eliza Haywood noted the key role women like Griffith were playing in cementing Shakespeare's place in the canon. "Some ladies indeed have shewn a truly public Spirit in rescuing the admirable yet almost forgotten Shakespeare from being totally sunk in oblivion: they have generously contributed to raise a monument to his memory...in preserving the fame of the dead Bard, they add a brightness to their own, which will shine to late posterity." In this sense, Griffith is not only promoting a long-dead male author; she is using his cultural capital to enhance her own, and to carve out space for women's voices within the field of canon-creation. Within the late eighteenth century, Griffith and her cohort were recognized and successful in their efforts. They published criticism. They urged London's theatrical managers to include Shakespeare in their repertories. They purchased copies of Shakespeare's work. "Yet Haywood's optimistic prophecy that these ladies would enjoy adequate reward for their labors in the glories of posterity has unfortunately proved mistaken. Women's contribution to 'preserving the long-dead Bard' has largely been forgotten, despite their pioneering role as agents of change in the history of his reputation" (Eger). The Morality of Shakespeare's Drama Illustrated is surviving evidence of that work. Further, the balance Griffith strikes in her book educates us about early women's methods of accomplishing public intellectual engagement while dodging extreme criticism. After all, Griffith tackles plays from Macbeth, to Cymbeline, to Othello -- texts that deal in the "unfeminine" topics of regicide, incest, and miscegenation -- always emphasizing how reading Shakespeare encourages national pride in ways that justify her interaction with them.

As the present copy shows, Elizabeth enjoyed the support and encouragement of her husband, Richard (their love story is the basis for Elizabeth's work, A Series of Genuine Letters Between Henry and Frances). In his holograph poem he writes: "To the Author. The uncertain minds of critics long perplext, With expositions on great Shakespeares text, While Parsons too forsake their proper sphere, To note his beauties or his blots declare, Regarding him but as a classic writer, Oer looking his merits higher, richer, brighter; Enamoured of his Ethics, Frances came, And crowned him with a nobler wreath of Fame. Explored his morals, gave his precepts praise, And shewed his heart superior to his lays. So different Geniuses their labours suit; They cull the flower while you collect the fruit. Proceed, chaste scribe, pursue thy virtuous plan, Whose every page reproves some view of man; Whose talents comprehend the fuller scope, Join taste to sense & ethics to a trope. Nay, better - add the example of thy Life; And prove the Wits inferior to the Wife."

Isabel Mortimer: or, The Southerner's Revenge. An Autobiography

by [Violence Against Women]

Florio: a Tale for fine Gentlemen and fine Ladies: and, The Bas Bleu, or Conversation. Two Poems

London : Printed for T. Cadell in the Strand , 1786
(click for more details about Florio: a Tale for fine Gentlemen and fine Ladies: and, The Bas Bleu, or Conversation. Two Poems)
View all from this seller>