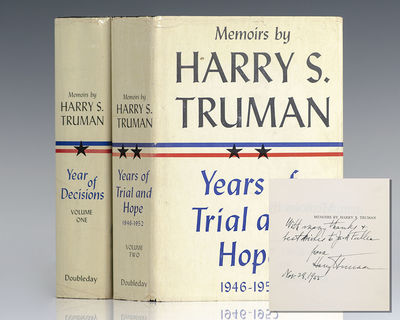 by Truman, Harry S
New York: Doubleday & Company, 1955-56. First editions of President Truman's presidential memoirs. Octavo, two volumes, original black cloth. Presentation copy, inscribed by the author on the half-title page of Volume I in the year of publication, "With many thanks and best wishes to Jack Fuller from Harry Truman Nov. 28, 1955." Both volumes are near fine in near fine price-clipped dust jackets. Jacket designs by Sydney Butchkes. Jacket photographs by Eliot Elsofon and U.S. Army Corps. "Trumans Memoirs are an invaluable record of the former presidents tumultuous years in office, his early days in Missouri, and his rise in local and state politics. There are delightful glimpses of his family life, striking appraisals and anecdotes of world leaders such as Churchill, Stalin, Chiang and De Gaulle, and candid disclosures about the background of national and international events. But overshadowing all is the story of the glorious task of bringing a war to an end, of working for an enduring peace and leading the free world into a new age" (Doubleday). (Inventory #: 119588)
$900.00 add to cart or Buy Direct from
Raptis Rare Books
Share this item