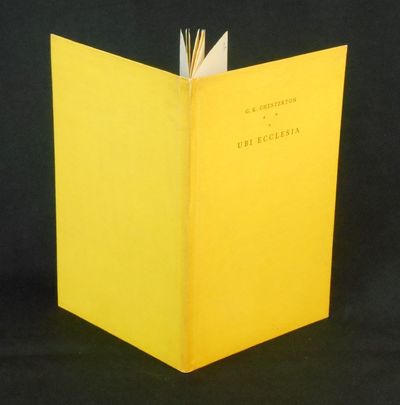 by Chesterton, G.K.; Murphy, Diana (Illustrations)
London: Faber & Faber Ltd, 1929. Limited Edition. Hardcover. Near fine. Murphy, Diana. No. 128 of 400 copies, octavo size, 12 pp., signed by G.K. Chesterton. No. 21 of "The Ariel Poems", a series of poems with illustrations published by Faber. The first series was comprised of thirty-eight titles published between 1927 and 1931; this the second Ariel Poem of Chesterton's, the first being "Gloria in Profundis" published in 1927. This poem, "Ubi Ecclesia" with two illustrations (one in colour) by Diana Murphy (of whom we could find no information); as of this writing, this the only signed and limited copy online (there was also a trade edition published).

Gilbert Keith Chesterton (1874-1936) was a major writer of novels, poetry, and Christian apologetics; he is perhaps best known for his series of detective stories featuring the priest-detective Father Brown, and for such apologetics as "Orthodoxy" and "The Everlasting Man". A forceful and prolific writer, Chesterton's works feature his masterful grasp of language and wit, as well as his strong Christian faith, and he was an influence on noted writers such as C. S. Lewis, Jorge Luis Borges, and Neil Gaiman.

___DESCRIPTION: Yellow paper over boards (a partial watermark can be descried on the front board, "MBM", which may indicate Arches paper) with gilt lettering on the front, limitation page with the signature of G.K. Chesterton, this no. 128 of 400 copies, half-title with the black-and-white illustration which appears on the wraps for the trade edition, colour illustration follows the title page, the poem consists of two pages printed on the recto only; on English hand-made paper, octavo size (8 5/8" by 5 1/16"), unpaginated with six leaves (including the colour illustration), twelve pages (including the final page being on the recto of rear free endpaper).

___CONDITION: Near fine, the boards clean other than light dustiness (but free of soil marks), straight corners without rubbing, a strong, square text block with solid hinges, the interior is clean and bright, and entirely free of prior owner markings (note that there is an old bookseller price of 3.00 and a code written in pencil at the top corner of the front free endpaper); the aforementioned light dustiness and a hint of rubbing to the bottom edges, else fine.

___Swan's Fine Books is pleased to be a member of the ABAA, ILAB, and IOBA and we stand behind every book we sell. Please contact us with any questions you may have, we are here to help. (Inventory #: 20082915)
$385.00 add to cart or Buy Direct from
Swan's Fine Books
Share this item

Why the Chimes Rang; An Ancient Christmas Legend

Lawrenceburg, Ind : Privately Printed [for] A.D. Cook, Inc , 1935
(click for more details about Why the Chimes Rang; An Ancient Christmas Legend)
View all from this seller>