FOUNTAINS IN THE SAND: RAMBLES AMONG THE OASES OF TUNISIA 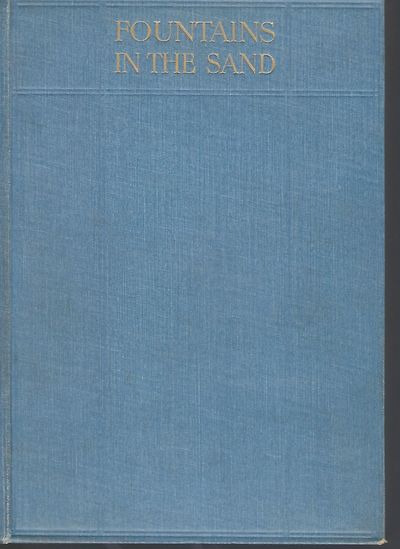 by DOUGLAS, Norman
London: Martin Secker, 1912. London, Martin Secker, 1912. First edition, only 1,000 copies were printed, with 260 shipped to American. [Woolf "Bibliography of Norman Douglas"; pp 35-39]. Woolf's binding ii, with blind stamping & no ornaments on the front cover, and author's name omitted at top; Woolf also notes that the fore-edges were unopened. Woolf notes that there is no evidence that the three variant bindings constitute different issues. A wonderful association copy with a nice provenance. Lengthy and interesting signed presentation from Douglas on the front endpaper: "To his friend Ralph Straus/ who has never read this book and probably never will, and who ought in every case to have waited for the 2nd edition due next February, not only because it is cheaper, but because some of the more manifest absurdities of this first one- including about 83 "but's" in the text: the rottenest word in the English language, save when employed for conversational purposes- are therein so expurgated; and a better index provided. The original MS of this book was nearly twice as long, but a literary friend, as usual, persuaded me to cut out all the best chapters- those, that is, which contained references to a certain fictitious "woman" of whom he disapproves on moral grounds, and whom I had artfully threaded through the narrative, to make it read a little more human and exciting. And Secker [publisher & editor Martin Secker], of course, chose for reproduction the very worst photographs of my large and painfully acquired collection, insisted on manufacturing a feeble index of his own, and has paid me, up to the present moment, L15 for the whole book- fifteen pounds, and nothing else whatever. This may explain why I am just now collaborating with a man who apparently makes some money out of his books; because "Fountains in the Sand"- not to be misnamed, cost me in travelling, photographs and typing, at least L70/ Norman Douglas/ Mentone. 12 Dec 1920. Norman Douglas." [Mentone is the Italian spelling of Menton, a commune in the Provence-Alpes-Cote D'Azur region in southeastern France. Page 79 bears a correction in Douglas' hand changing "cave hunting savages" to "cave haunting savages". Personal bookplate of Jean Hersholt [1886-1956]- the Danish-born actor who worked in Hollywood for over 30 years in both silent and "talking" films. He was an avid book collector. Ralph Sidney Albert Straus [1882-1950] was a novelist and biographer with an interest in 18th century printing. His career included printing, publishing, authoring, and editing: biographies, bibliographies, histories, bio-biographies, anecdotes, humor, criticism, interpretation, and science fiction An exceptional copy of a scarce book!. Thick 8vo., embossed blue cloth, stamped in gilt; 251 pp. including index, in clear acetate (supplied) protective cover. In a brown slipcase. Frontispiece & 16 Plates.. Very Good (covers nice & bright; contents clean & tight with little discoloration several rear four pages. Woolf mentions that the fore-edges were uncut on some copies and this is one. The edges have been nicely cut open (except for four blank pages at the rear) and while it is a good job, there are still a few pages that have minor problems- not a big deal. Also with a full-page color illustration (of a Tunisian gateway?) tipped to the front pastedown (by Douglas?). Overall, a nice copy, in a clear, acetate dust jacket in a slipcase that has wear and has been touched up. Perhaps original to the Hersholt collection? A wonderful copy by any standards! (Inventory #: 57158)
$1,500.00 add to cart or Buy Direct from Antic Hay Books
Share this item
Antic Hay Books
Offered by

THIS IS JUST MY FACE, TRY NOT TO STARE

Boston/New York : Houghton Mifflin Harcourt , 2017
(click for more details about THIS IS JUST MY FACE, TRY NOT TO STARE)

ALESSANDRO VOLTA AND THE ELECTRIC BATTERY. IMMORTALS OF SCIENCE SERIES

NY : Franklin Watts, Inc. , 1964
(click for more details about ALESSANDRO VOLTA AND THE ELECTRIC BATTERY. IMMORTALS OF SCIENCE SERIES)
View all from this seller>