"CALLING ON MY PATIENTS THE MOMENT THEY OWE ME ANYTHING IS NOT [IN] MY INTEREST." - PS: COULD YOU SPARE SOME MONEY OR MAYBE BUY A FARM FOR ME? 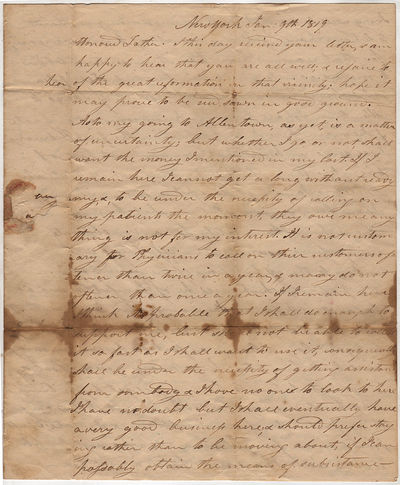 This three-page stampless folded letter measures 9" x 16" unfolded. It is datelined "New York Jan 9th 1819" and bears a red, circular New York City postmark dated January 19 and a manuscript rate mark that reads, "18½", the cost to mail a letter between 150 and 400 miles.

In this letter, Dr. King explains that although he has been successful medically, his finances are suffering, and he fantasizes about owning a farm:

"My going . . . as yet, is a matter of uncertainty, but whether I go or not, shall want the money I mentioned in my last. If I remain here I cannot get a long without ready my & to be under the necessity of calling on my patients the moment they owe me anything is not for my interest. It is not customary for Physicians to call on their customers oftener that twice in a year & many do not oftener than once a year. If I remain here I think it probably that I shall do enough to support me, but shall not be able to collect it so fast as I shall want to use it, consequently shall be under the necessity of getting assistance from somebody. . .. I have no doubt but I shall eventually have a very good business here, & should prefer staying rather that to be moving about, if I can possibly obtain the means of subsistance. . .. I have been very successful in what business I have had. I have lately had a very obstinate case of fever & succeeded in effecting a cure contrary to the expectations of the friends of the patient, which will be of benefit to me as for as it is known. . . ..

"There will be a large quantity of government land sold in the Ilinois terrytory sold next summer. . .. I suppose a man with five hundred Dollars might by 1000 acres with the utmost safety; he can by a safe calculation meet the other payments from the produce of the land, the possibility of getting to market is increasing the value of the land very rappidly. There is now 40 steamboats on the Mississippi & in the course of next season there will probably be many more, If I could settle in that country it would certainly contribute very much to . . . interest of my children. But I suppose you would be unwilling to rais me five or six hundred Dollars to go into the western country though I am confident it would be more to my interest than to have Chambers farm hear - but as you will think all this visionary I will say no more about it. . ..".

Online genealogical and town histories reveal that Aaron did not make it to Illinois. He had been a young physician in Palmer, Massachusetts before he left with his family for New York in 1817, and he returned to Palmer in 1823 where he practiced medicine until his death in the early 1860s. (Inventory #: 009650)
$150.00 add to cart or Buy Direct from
Read'Em Again Books and Paper
Share this item