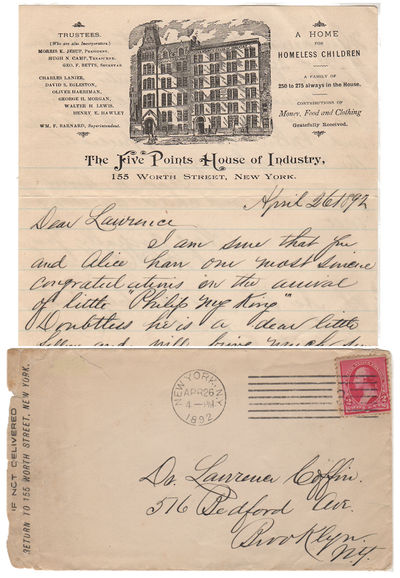 by Wm. F. Barnard
A personal letter from the Superintendent of The Five Points House of Industry

Envelope or Cover. Very good. This letter, written using the illustrated stationery of The Five Points House of Industry, is datelined April 25 1892. The lettersheet features an illustration of the institution along with the names of the trustees and superintendent. The institution's address is printed along the left border of the mailing envelope which is franked with a 2-cent carmine stamp (Scott #220) that was canceled with a New York machine postmark dated April 26, 1892.

A heartfelt letter of congratulations to a friend on the birth of a child.

During the 19th century, New York City's Five Points district was the most horrendous slum in all of the United States (perhaps all of the western world except for London's East End) with incredible concentrations of infectious diseases, infant and child mortality, unemployment, prostitution, and violent crime including murder.

Lewis Pease was a Methodist minister who the church hired in 1850 to establish a Five Points Mission in an attempt to reform the district, especially its rampant prostitution, under the auspices of the Ladies Home Missionary Society. Pease immediately set to work, after determining that most of the prostitutes had turned to the trade not because they were immoral or drawn to a prurient lifestyle. Rather, he found, they became prostitutes to survive . . . to support themselves and their children because there were no other nearby employment possibilities. Therefore, Pease focused his efforts on job training and job placement Unfortunately for him, the Society saw things differently and directed that he refocus his efforts on saving souls, which would, it believed, inspire the women to give up prostitution and find other jobs somewhere. The final straw came when several Society women visited the mission and discovered Pease had not preached a sermon in several days as he had been busy obtaining fabric for the mission's workshop. He was fired immediately, but just as quickly established the Five Points House of Industry, which grew rapidly and soon had a much greater impact on the community than the original mission. Pease served as its superintendent for many years but later moved on to Ashville, North Carolina where he established three teaching and industrial schools for poor Appalachian youth: one for white girls, one for white boys, and one for African-American boys and girls. Bernard was a later superintendent of the institution.
(For more information, see Asbury's, Gangs of New York, Anbinder's Five Points. . .., and "Five Points House of Industry" online at Antebellum Social Movements." Also, the most important book in Preston and Child's Pendergast series, The Cabinet of Curiosities, centers on murders related to the Five Points Missions.). (Inventory #: 009659)
$100.00 add to cart or Buy Direct from
Read'Em Again Books and Paper
Share this item