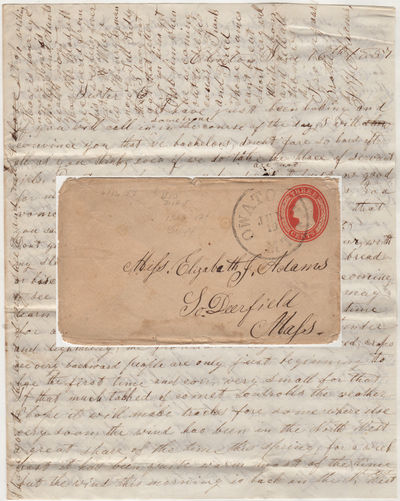 by F. (Francis) F. Adams to his sister
A Minnesota homesteader's letter referencing local politics, the territory's constitution, community growth, construction of a school, preemptive purchasing, prices of goods, and bachelor life
This four-page letter datelined "Clifton June 16th 1857" is enclosed in its original 3-cent postal envelope (Scott #U10, Die 5) and cancelled with a very scarce "Owatonna / MT" postmark (see ASCC, v1, p189) June 19. Both are in nice shape; one of the envelope's back-panel flaps is missing. A transcript will be provided.
In 1853, five hardy souls (well, not that hardy as only two wintered over) established homesteads in the area of what today is Clinton Falls, Minnesota. The following year, in 1854 they were joined by Francis F. Wilson and another dozen or so settlers. After sawmills were established in 1855 and 1856, the village grew rapidly. Stage transportation reached Clinton Falls in 1856 and a mail route was established to a post office that had opened in Owatonna.
In this letter, Adams provides his sister in Massachusetts with an update on his new life in Minnesota:
"I have just been bakin. . .. I cant see why a man's hands are not just as good for mixing bread and such like as a womans. . .. Don't you wish you could see me, little boy only six feet four with my sleeves rolled up mixing up a batch of bread or biscuits. Some of the women say they are coming to see how I get along. Let them come they may learn something. . .. Arnold is off at work on the school house to day. The people have done most of the work themselves instead of hiring it done. They want to finish it tomorrow so that School can commence next day. . .. The house is a good deal larger than is needed for a School house, it is intended for a meeting house to. . .. The women of the sewing society are intending to get up a supper fourth of July on the Drs hill. . .. Mr Thomas is to deliver the oration. I think the people of this country had better celebrate something else than their independence until they make themselves more independent of the Slave Oligarchy. I do not know which party have a majority in the constitutional convention. They are very evenly divided and it will not be known which are in the majority until the returns are all in. Our district had gone Republican. . .. There was 220 votes cast in the township of Medford and Owatonna only 29 of which were democratic. . .. The prospect now is that the junction of the railroads will be about four miles south of Owatonna, the surveyors have been through on that route three times. . .. I am a little afraid the north and south road will cut through my claim it will if comes down the valley of the river. . .. I preempted week before last so I suppose I am owner of 160 acres of land. Had I staid in Mass and worked hard all my live I should not have earned enough to have bought a much there, preempting board and all while I was. It cost me $174.85 my warrant cost me $165 part of it was an interest long enough to amount to another dollar. Registers and Receivers fee and making out papers $7.50 board $1.35. . .. Potatoes sell here for $1.25 . . . flour $5.00 per hundred Salt back salted bone and all from 17 to 18 cts Wheat $1.50 per bushel. Dried peaches and apples 10 cts. Molasses $1.25 per gallon syrup $1.80."
(For more information about Francis Adams and Clifton Forge, see History of Steele and Waseca Counties, Minnesota. . .. by "Old Settlers" (Nathaniel Winship, et. al.) available online.)
Initially, it was illegal to settle on any "unoffered" or public land in Minnesota, however this prohibition "proved ineffective as settlers moved onto and improved unoffered and unsurveyed land. Once the pre-empted [i.e. squatted upon] land was surveyed and about to be offered for bid and auction, the settlers were often faced with the prospect of losing their claim to the highest bidder. In order to forestall removal from their claim, the pre-emptors frequently organized 'claim clubs' that worked to delay the scheduling of sales or attempted to prevent bidding on pre-empted claims." It wasn't until an act of 1854 extended pre-emption rights to settlers on unsurveyed land in Minnesota that these pioneers were allowed to legally claim and purchase their homesteads. (See Minnesota Pre-1908 Homestead & Cash Entry Patents, Department of the Interior, Bureau of Land Management, cd-rom.). (Inventory #: 009653)
$250.00 add to cart or Buy Direct from
Read'Em Again Books and Paper
Share this item