[ANNOTATED VERNACULAR PHOTOGRAPH AND SCRAPBOOK ALBUM RECORDING THE LIFE OF JAPANESE-AMERICAN WOMAN, ALICE ARIKAWA, FROM JUNIOR HIGH SCHOOL TO JUST BEFORE SHE WAS INTERNED AT MANZANAR] 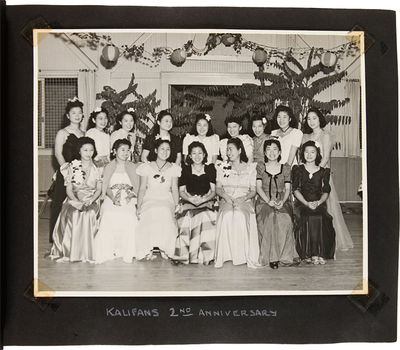 by [Japanese-American Photographica]: [Arikawa, Alice Sakiko]
[Los Angeles, 1942. 202 vernacular photographs, ranging from 1 1/2 x 1 1/2 inches to 8 x 10 inches, plus thirteen assorted ephemeral items. Oblong folio photograph album. Contemporary reptile-textured cloth over limp boards, string-tied. Minor edge wear, front bottom corner creased. Ownership signature reading "A.S.A. 1942" on inside front cover. A few images detached, minor occasional wear to photographs or ephemeral items. Overall very good. An important and informative annotated photograph and scrapbook album assembled by Alice Arikawa, a young Japanese-American woman from Los Angeles. The album records Arikawa's life from her last day at Lafayette Junior High through her high school years and to the cusp of her evacuation to the Manzanar War Relocation Center. Alice Sakiko Arikawa Presnell (1920-1992) was a first-generation Japanese American from Los Angeles. She graduated from Lafayette Junior High in 1934 and Thomas Jefferson High School in 1937, after which she spent some time at Los Angeles City College. In June 1942, she was evacuated to the Manzanar War Relocation Center. After World War II, she served as a clerk for the 71st Signal Battalion Service in Occupied Japan. While there, she met and married one of the officers for whom she worked, Paul Presnell. The photographs record Alice Arikawa in a wide range of activities apropos of a young girl in Los Angeles in the 1930s. She is seen with her junior high and high school classmates and teachers (often identified in the captions), at her dance class, in her Business Correspondence class (important for her career just after World War II), at the beach, on summer vacation in the mountains, on Camera Day, showing off her graduation dress, with her "Club Girls on YWCA Grounds," at the "Kalifans 2nd Anniversary" dance, on the streets of Los Angeles taking "time off from Beauty School," and spending a "summery day" at Sycamore Park. Arikawa evidently liked horses, as she retained several pictures of her and her friends on horseback at Cal-Baden Stables near Montebello Hills (east of Los Angeles) and at the Santa Anita racetrack. Around this time, she also visited the Huntington Library (retaining four pictures of the grounds), Ocean Park, Arroyo Seco, and Santa Monica Beach. She also records her friend Elm on her wedding day, a recently-married friend named Jane, and a friend named Nak in front of her "Beloved 41 Chevy" before including eight pages of annotated photographs of a "Glorious Weekend at Eliza Cottage Hermosa Beach Sept 1941." The remainder of Arikawa's experiences in 1941 include her and her girlfriends visiting soldiers in San Luis Obispo and concludes with Thanksgiving Day in Pasadena (including a picture of her Thanksgiving dinner). The album ends abruptly with two photographs in March 1942 - one of a young friend named Bob and another of Arikawa with her giant Saint Bernard, Napoleon; Alice Arikawa was interned at the Manzanar War Relocation Center three months later. A handful of loose photographs in the album feature a large portrait of Alice Arakawa, a few school and other group photographs (namely her Lafayette Junior High School Class of 1934), and others. Most notable is a school photograph of a graduating class inside the Manzanar camp. Alice had already graduated high school, so this picture very likely commemorates the graduation of one or more of Alice's siblings. The ephemeral items here include a 1948 Identification Card belonging to Alice Arikawa's brother John, though he would have been too young to be pictured in the Mazanar graduation photo. His ID card states he is fifteen years old. In addition to John Arikawa's ID card, the ephemeral items here include an issue of Alice's junior high school newspaper, the LAFAYETTE SENTINEL (in which she aspires to be a "Chorus Girl"), her junior high school diploma, commencement programs from both her junior high and high school graduations, a program for a junior high dance recital, and other items. Other ephemeral items include two letters to Alice from well-wishers congratulating her on winning the "Who's Who in Hollywood" prize from the LOS ANGELES TIMES. Arikawa tied with two other young women by achieving a perfect score in the contest, which was apparently some type of film quiz. Arikawa is pictured here with the two other winners in newspaper clippings regarding the contest. A few of the photographs in the album also speak to Alice's interest in film culture, as she is pictured with her YWCA social club, the Kalifans. The Kalifans were known to partner with other groups of young Nisei women specifically to attend film screenings and other cultural activities. An endearing photograph and scrapbook album assembled by a young Japanese-American woman in California just before the internment period during World War II. (Inventory #: WRCAM55997)
$4,500.00 add to cart or Buy Direct from
William Reese Co. - Americana
Share this item

NEWS OF THE PLAINS AND ROCKIES 1803-1865. ORIGINAL NARRATIVES OF OVERLAND TRAVEL AND ADVENTURE SELECTED FROM THE WAGNER-CAMP AND BECKER BIBLIOGRAPHY..

by White, David A., editor

Spokane : Arthur H. Clark Company , 2001
(click for more details about NEWS OF THE PLAINS AND ROCKIES 1803-1865. ORIGINAL NARRATIVES OF OVERLAND TRAVEL AND ADVENTURE SELECTED FROM THE WAGNER-CAMP AND BECKER BIBLIOGRAPHY..)
View all from this seller>