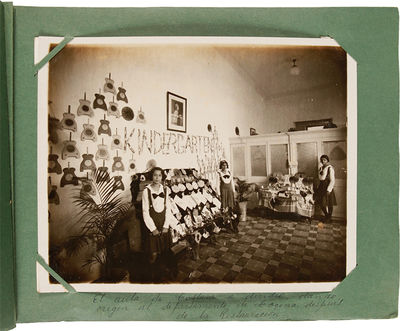 by [Cuba]: [Education]
[Havana, 1932. Thirty-two original photographs, eighteen of which measure 8 x 10 inches, the remainder between 2 1/4 x 3 1/2 inches and 7 x 11 inches, some dated either 1931 or 1932. Annotated throughout in Spanish. Oblong folio. Contemporary green wrappers, manuscript title on front wrapper reading, "Album E.R.C." Spine ends a bit chipped, faint dampstain on front wrapper, minor edge wear, and light dust-soiling. Minor wear to photographs. Overall very good. An album of annotated photographs from the Colegia Para Niñas Romualdo de la Cuesta, an all-girls school in the central district of Havana, Cuba, during the early 1930s. The photographs, most of which are of substantial size, depict the individual students, interiors and exteriors of the school, the art room, restrooms, a "fiesta" attended by both students and teachers, class pictures, and a school field trip, among other aspects of school life in Havana. The annotations provide significant context to the photographs, and the whole stands as a vital record of school life for young women in Havana in the early 20th century. The demographic composition of the student body is interesting. Each class shown here is made up of Hispanic and African-Cuban young ladies from kindergarten to approximately middle school. The students pose for the camera in classrooms and at various school events, namely a field trip to El Capitolio (the National Capitol Building), where dozens of the students pose on the steps of the capitol, inside the legislative room, in the Hall of Lost Steps, inside the Cuban Library of Congress, and ranged around La Estatua de la República (the Statue of the Republic) in the main hall of the Capitolio. The photographs conclude with a group shot of what may be the entire student body of the school and a group photograph of the teachers and administrators of the school, all women. Some of the photographs concern restoration of some part of the school in 1931, with the annotations making reference to the renovations. In a few instances, facing photographs show settings in the school before and after the renovations, including classrooms and the restrooms. One of the captions, underneath a photograph of desks in a room on a tile floor, reads, "Aula segunda - Antes de ser restaurada el Colegio, por el Sr alcalde: Cap Jose Izguierdo Julia" [in English, "Second classroom - Before the College was restored by the mayor: Cap Jose Izguierdo Julia"]. In 1931, the municipality of Havana became the Central District of Cuba. The district was governed by an alcalde (or mayor) appointed by the president. In that year, President Gerardo Machado appointed Sr. Jose Izguierdo Julia as Alcalde of Havana. The Colegia Para Niñas Romualdo de la Cuesta, created by philanthropist Romualdo de la Cuesta, stood three stories tall, and had capacity for 300 students. A 1907 Cuban geography book refers to it as a free private school, but by the 1940s it was considered a public school and received municipal funds. The school struggled through many transitional periods in Cuban history, from the colonial period to the post-colonial years. During the earlier colonial period, the school was segregated, and classified "para ninos de color" ("for children of color"). After civil rights campaigns and petitions to the government, the Spanish colonial government integrated Cuban schools in 1894, though the process was slow. Cuban schools remained integrated following the American occupation of Cuba after the Spanish- American War, and thereafter. Fluctuations in the Cuban economy affected schools over the next few decades, and the current album, with its depiction of school renovations and full classrooms, represents one of the high points in enrollment and investment in Cuban education in the 20th century. A wonderful record of the education of young Cuban women in the early 1930s. (Inventory #: WRCAM56031)
$1,500.00 add to cart or Buy Direct from
William Reese Co. - Americana
Share this item

[N.p., but likely Clearfield, Pa 1889
(click for more details about [MANUSCRIPT MEMOIR OF THE EXPERIENCES OF GERMAN IMMIGRANT ALBERT WALTHER IN MID-TO- LATE 19th-CENTURY AMERICA, INCLUDING HIS JOURNEY TO NEW ORLEANS, HIS LIFE IN ST. LOUIS AND PENNSYLVANIA, A LENGTHY ACCOUNT OF HIS SERVICE WITH THE 84th INFANTRY REGIMENT OF THE PENNSYLVANIA VOLUNTEERS DURING THE CIVIL WAR, AND HIS CAPTURE BY THE REBELS, WITH MANUSCRIPT MAPS OF THE BATTLE OF KERNSTOWN, THE BATTLE OF PORT REPUBLIC, AND PART OF THE INTERIOR OF LIBBY PRISON])