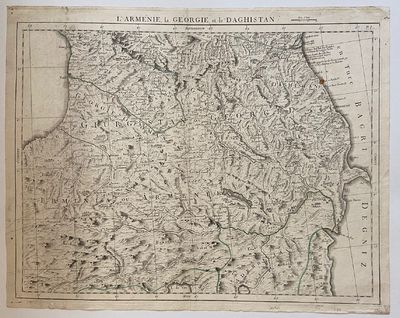 by SANTINI, Francois
Venice: Remondini, 1784. Map. Engraving with original hand outline color. Image measures 18 1/8 x 22 7/8". This beautiful 1784 map of the Caucasus region depicting "L'Armenie, la Georgie, et le Daghistan", or present-day Armenia, Georgia, Dagestan (Russia), and Azerbaijan extending from the Black Sea to the Caspian Sea. The map shows the region in wonderful detail, showing mountains, cities, lakes, rivers; as well as notable historical sites such as battle grounds and ancient ruins. This map is based on Giovanni Antonio Rizzi-Zannoni's 1774 three-part map of the Ottoman Empire, later extended to a six-part map for Santini's "Atlas Universel". It is in very good condition with wide side margins as issued. Small stain in top right portion of map. Paolo Santini (1729-1793) was a Venetian cartographer, engraver, and publisher who worked closely with Janvier. The map was published in Santini's "Atlas Universel dressé sur les meuilleures cartes modernes", and is a fine example of his work. (Inventory #: 297821)
$350.00 add to cart or Buy Direct from
Argosy Book Store
Share this item