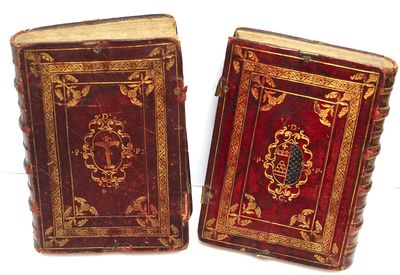 The armorial on the front cover bears a cartouche surrounded with the initials DPCP; a crucifix is in the center. On the back cover, a crest probably of the Chigi family (a Roman princely family of Sienese extraction). The crest may also be that of the Paleotti family from Bologna, several of whom ended up as Cardinals in Rome.
Pagination: Vol. I Leaf of title, verso blank; 10pp Tavola de I discorsi; 7p De I discorsi; 19p Indice; 5p Proemio; 1 blank leaf; Text pp 1-412; Vol II. Leaf of title of Volume Secondo, verso blank; text pp 412- 820. Collation I: a-h4, [2L]; A-Eee8, (H2 mis-signed G2), Fff4 (last leaf a blank). II: [L], Fff8 (with fff7-8 unsigned on a stub, bound between fff4-fff5, text is in proper order), Ggg-Kkkkk8, Lllll3. Xx7 with tear to lower right margin (no text missing) Iiii4 tear to bottom margin missing 2" x 1" chip, no loss of text. Ornate initials, round type device of the editor and publisher Francesco Bolzetta (1590-1615), publisher and 'libraro dell'Academia' active in Padua at the end of the sixteenth and beginning of the seventeenth century.
The author Alonso de Villegas Selvago (b. Toledo 1533 – d. 1603) was a priest and gifted religious writer during the Counter Reformation. Little is known of his parents or his early years. We do know that in 1554, when he was a student the University of Santa Catalina, he wrote and published a profane play known as Selvagia. This is a parody of Comedia de Calisto y Melibea, called, La Celestina attributed to Fernando de Rojas, written in 1499. Critics consider Selvagia along with La Dorotea of Lope de Vega, the best contemporary imitations of La Celestina. ***
Although his early writing suggest he had a bright future as a secular author, Villegas turned away from his youthful adventures to become a priest and important hagiographic writer. During 1562 Villegas obtained an academic degree in theology and philosophy. He became professor of theology at the University of Toledo and later chaplain at the cathedrals of San Sebastian and also of San Marcos. Villegas chose not to become permanently associated with any parish; instead, he became a sacred writer most famous for his Flos Sanctorum (Flowers of the Saints) a six volume work that recounts the lives of Jesus Christ, Mary, the twelve Apostles, all the saints to which the Catholic Church prayed at the time, as well as, the patriarchs and prophets of the Old Testament, and the Saints not listed in the Roman Breviary and many other eminent men. This project occupied him from 1577 to 1603.
Flos Sanctorum is a product of the Church's attempts during the Counter-Reformation period to revise and modernize its rituals and readings as suggested by the Council of Trent. Flos Sanctorum was immensely popular up into the18th century appearing in 88 editions (not to mention the pirated edition which infuriated Villegas). In addition, it was translated into several European languages, English and even into the Nahuatl of Central America for the Peruvian people. (to get an idea of its publishing success, consult Palau (XXVII, 252-261).
Because Villegas has been largely forgotten, when compared to his counterpart Pedro de Ribadeneira S.J. (Toledo, 1 November 1527 – Madrid, 10 September or 22 September 1611), it is worthwhile to review Villegas' central importance to the Counter Reformation in Spain, Europe and the New World.
Villegas' writing is important for several reasons: first, it provided artists with subject matter for their paintings and sculptures of the saints (as did the earlier legends of Jacob de Voragine). Because Flos Sanctorum was very carefully written in an attempt to bring early saints back to life. Palau (369117) calls Villegas an important figure of the Spain's golden age for his vivid and detailed descriptions.
Secondly the playwright Lope de Vega extensively used Villegas' Flor Sanctorum as subject matter for his comedias de santos, a genre of drama which Lope helped to create. According to Robert Morrison the comedia de santos genre presents the characters of saints of many regions and periods, with Lope de Vega, accepted as a spokesman for this genre. Within these dramas, the saint becomes a hero as he was presumed to be the person who approached, as closely as humanly possible, Christ's perfection. The hero of the drama practiced all the Catholic virtues and was therefore worthy of admiration and imitation (499-500).
This text along with its fine binding shows the spread of Villegas' ideas and importance throughout the Catholic world of the early 17th Century.

Notes * The translator is Grazio Maria Grazi (Sinalunga, 1553 - after 1625). Grazi (or Gratii) was a humanist, poet, bibliophile, translator and professor. A profound connoisseur of Greek, Latin and Spanish, he successfully translated works by Plutarch, Ribadeneyra, Villegas and Campiglia most going through several editions. Grazi was a priest and a teacher at the Seminary of Treviso as a Master of Humanity and then at Milan in the service of Federigo Borromeo, whose esteem and friendship he soon won, so much so that he was called "our family member." **Villegas' writing were translated into Nahuatl indicating he was part of early Jesuit evangelical efforts directed toward the indigenous peoples of Peru. Villegas' work was published in Peru as early as 1612. For example: Brown University holds Villegas' Book of the life and miracles of Our Lord Iesu Christo in two languages, Aymara, and romance translated from... Alonso de Villegas, removed, and added some things, and accommodated to the capacity of the Indians.[Translation to English as in Brown's record] , Juli [Peru]: Impresso at the house of the Companies of Iesus de Iuli village in the province of Chucuyto by Francisco del Canto, 1612. This work contains brief remarks on phonetics and approximately 40 sample vocabulary words in Aymara and Spanish.
According to Louise Burkhart in her IMS monograph (2001) Before Guadalupe: The Virgin Mary in Early Colonial Nahuatl Literature, a wide range of Nahuatl literature on the Virgin shows that "Nahuas people were introduced to, and to varying degrees participated in, the full-blown medieval and Renaissance devotion to Mary". Burkhart reviews the Nahuatl-language devotional texts relating to Mary, texts through which Nahuas learned about the Virgin and expressed their own developing devotion to her. She cites Villegas' work as instrumental in this development (his 1760 translation is cited).
***According to Marcellin Menendez Pelayo , the author of the Selvagia "manifests the excellent skills to give him a very marked place among the best-time prosists of our Language." (Quoted in Romeraldo pp. 783-793).