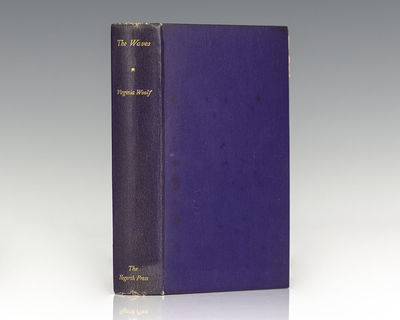 by Woolf, Virginia
London: The Hogarth Press, 1931. First edition of Woolf's most experimental novel. Octavo, original purple boards. In very good condition with portions of the majority of the original dust jacket laid in. Jacket design by Vanessa Bell. Considered by many to be Woolf's most experimental novel, The Waves contains a series of soliloquies spoken by the book's six primary characters: Bernard, Susan, Rhoda, Neville, Jinny, and Louis, each fiercely individual yet together forming a central, universal consciousness. Literary scholar Frank N. Magill ranked the novel one of the 200 best books of all time in his reference book, Masterpieces of World Literature and in a 2015 poll conducted by BBC, The Waves was voted the 16th greatest British novel ever written. (Inventory #: 115478)
$400.00 add to cart or Buy Direct from
Raptis Rare Books
Share this item