THE BURDEN OF ENGELA; A Ballad-Epic 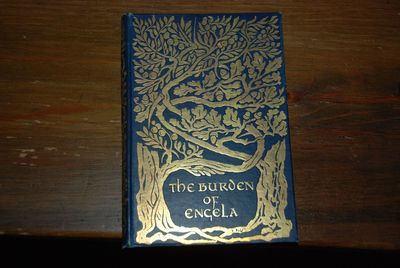 by BUCKTON, Alice Mary
London: Methuen, 1904. Second edn. 8vo, pp.144 + adv. Uncut and partially unopened. Bookplate on the front paste down. Bound in original dark blue cloth with an elbaborate gilt oak tree design. This is a verse descpription of the life of a Boer woman on a farm in the Transvaal during the Boer War. from Albion.org "The remarkable Alice Buckton was born in Haslemere in the middle period of the nineteenth century. She became a primary visionary figure in the emerging spiritual history of Britain. As fate decreed a neighbour of the Bucktons was poet laureate Alfred Lord Tennyson and as a young child she sat upon his knee while he read his poetry out loud and held a candle for him while he wrote and told her of his belief in the immortality of the soul. She was later to read an address at Tennyson's funeral in Westminster Abbey and he gifted her his cloak which she was to wear for many years when in residence in Glastonbury. She was influenced by the ideas of Edward Carpenter (a friend of both Tagore and Walt Whitman) and by Octavia Hill's Southwark Women's University, the Froebilian Society and the Pestalozzi School in Germany. She was an early feminist believing in women's suffrage. Her interest in education led her to Berlin where she met her life-long companion Anette Schepel who came back with Alice to England to set up the Sesame Child Garden and House for home life training in St John's Wood in 1898. She was good poet and playwright (her verse comes to life when read aloud and performed) her first book of poetry being published in 1901. The reviews for her stage plays in London were astoundingly good; the Guardian writing - 'All London has been startled into reverent wonder and and admiration by the production of the mystery play, the conception of which is one of true beauty,' and the Bishop of London - 'All should go and see this wonderful play (Eager Heart) which has touched and moved us beyond words.' (Inventory #: 59615)
$72.00 add to cart or Buy Direct from
Second Life Books
Share this item