Advise and Consent: A Novel of Washington Politics. 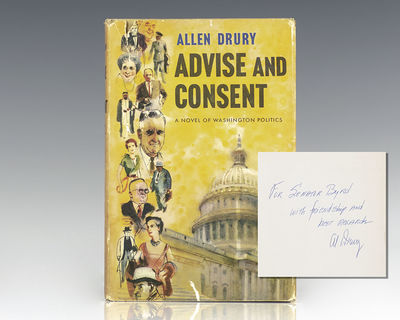 by Drury, Allen
New York: Doubleday & Company, 1959. First edition of the author's Pulitzer Prize-winning novel. Octavo, original cloth. Association copy, inscribed by the author on the front free endpaper, "For Senator Byrd with friendship and best regards Allen Drury." The recipient, Richard Byrd was an American politician who served as a United States Senator from West Virginia for over 51 years, from 1959 until his death in 2010. A member of the Democratic Party, Byrd also served as a U.S. Representative for six years, from 1953 until 1959. He remains the longest-serving U.S. Senator in history; he was the longest-serving member in the history of the United States Congress until surpassed by Representative John Dingell of Michigan; he was the last remaining member of the U.S. Senate to have served during the presidency of Dwight Eisenhower; and he was the last remaining member of Congress to have served during the presidency of Harry S. Truman. Byrd is also the only West Virginian to have served in both chambers of the state legislature and both chambers of Congress. Good in a good price-clipped dust jacket. Jacket painting by Arthur Shilstone. A very nice association, uncommon in the first edition and signed. The Saturday Review said of Advise and Consent in August 1959 that "It may be a long time before a better one comes along." Roger Kaplan of Policy Review wrote in 1999 that the novel "in many ways invented a genre in fiction. The use of a racy intrigue, if possible involving both sex and foreign policy, is what characterizes the contemporary form. Forty years on, Advise and Consent is the only book of this genre that a literary-minded person really ought to read." The novel was adapted into the 1962 film Advise and Consent, directed by Otto Preminger and starring Walter Pidgeon and Henry Fonda. (Inventory #: 119883)
$2,500.00 add to cart or Buy Direct from
Raptis Rare Books
Share this item