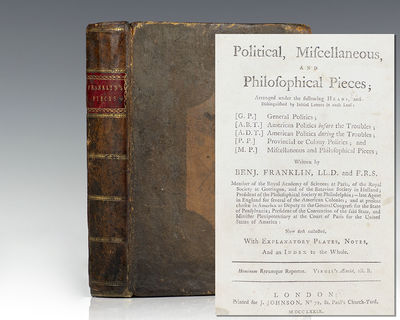 by Franklin, Benjamin
London: J. Johnson, 1779. First edition of "the only edition of Franklin's writings (other than his scientific) printed during his lifetime" (Ford). Thick quarto, bound in full contemporary calf with gilt ruling to the spine, red morocco spine label lettered in gilt, gilt turn-ins. With the engraved frontispiece portrait of Franklin, two full page engravings, one folding engraving and on folding typographical table. In very good condition. Complete with index, addenda and corrigenda. Bookplate to the pastedown of Hereward Brackenbury. A rarity in contemporary calf. "The only edition of Franklin's writings (other than his scientific), which was printed during his lifetime; was done with Franklin's knowledge and consent, and contains an 'errata' made by him for it" (Ford, 342). Edited by his close friend Benjamin Vaughan and published in London while Franklin was serving as America's ambassador, this seminal collection contains many of his writings on the rebellious American colonies and incendiary British measures such as the Stamp Act. Of particular interest is The Examination of Dr. Benjamin Franklin (255-301), a record of his 1766 appearance before Parliament. In Franklin's answers to the over 150 questions posed him in an afternoon of "highly charged testimony, he would turn himself into the foremost spokesman for the American cause" (Isaacson). (Inventory #: 119776)
$12,500.00 add to cart or Buy Direct from
Raptis Rare Books
Share this item