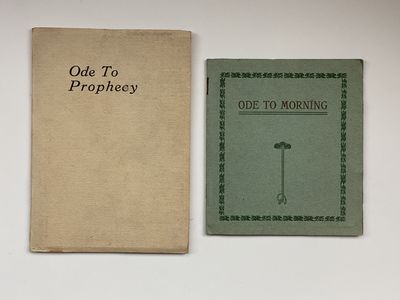 by Dilworth, Hiram Powers
Privately Printed by the Author, 1913. 12mo. Beige and light blue wrappers, the latter with decorated borders and gilt lettering. Dilworth published several poems, such as "The Cup of Joy", "Les Sonnets Celestes", and "Ode to Morning", but desired to remain an independent poet rather than a poet-for-profit. With ALS from Dilworth to Edith Emerson, " Will you accept a copy of my booklet, "Ode to Prophesy?" It will be my pleasure if you will give my poem such courtesy. While I will not promise to change my poem, I will promise promise to disregard my feelings if you should ever care to offer it candid criticism." Edith Emerson was the lifetime friend and live-in resident along with Violet Oakley, Jessie Willcox Smith and Elizabeth Shippen Green. After the death of Oakley, she became curator/manager of all the personal holdings of the three artists, until her death in 1981. This book comes from the original book collection, obtained in the early 1980's. Both booklets near fine. (Inventory #: 5008)
$150.00 add to cart or Buy Direct from
Nudelman Rare Books
Share this item